President Biden Urges Concern But Not Alarm As Omicron Rises 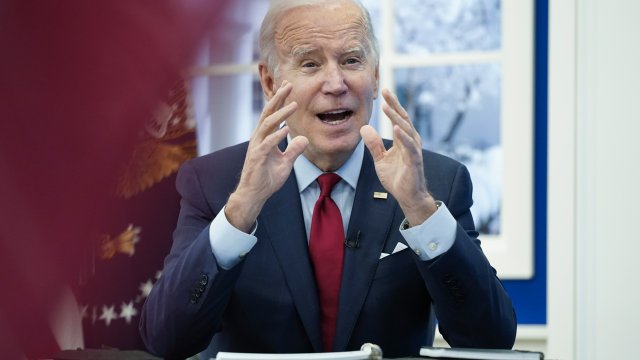 The president emphasized vaccines, booster shots and therapeutic drugs have mitigated the danger for the overwhelming majority of Americans.

President Joe Biden urged concern but not alarm Tuesday as the U.S. set new records for daily reported COVID-19 cases and his administration struggled to ease concerns about testing shortages, school closures and other disruptions caused by the surging omicron variant.

Speaking ahead of a meeting with his COVID-19 response team at the White House, the president looked both to convey his administration's urgency toward addressing the new variant and to convince wary Americans that the current surge bears little resemblance to the onset of the pandemic or last year's deadly winter. The president emphasized that vaccines, booster shots and therapeutic drugs have mitigated the danger for the overwhelming majority of Americans who are fully vaccinated.

Compared to last year, more Americans are employed, most kids are in classrooms, and instances of death and serious illness are down — precipitously so among the vaccinated.

“We’re in a very different place than we were a year ago,” said White House press secretary Jen Psaki when asked if the country had lost control of the virus.

Still, over the past several weeks Americans have seen dire warnings about hospitals reaching capacity amid staffing shortages, thousands of holiday flight cancellations in part because crews were ill or in quarantine, and intermittent reports of school closures because of the more-transmissible variant.

“I believe schools should remain open,” Pres. Biden said, adding that they have the funding needed for testing and other mitigation measures to stay open during the surge.

The president also announced that the U.S. is doubling its order for an anti-viral pill produced by Pfizer that was recently authorized by the FDA to prevent serious illness and death from COVID-19. That means 20 million doses, with the first 10 million pills to be delivered by June.

A senior administration official said that combined with other therapies, such as monoclonal antibodies and convalescent plasma, 4 million treatments that are effective against the omicron variant would be available by the end of January.

“They’re a game changer and have the potential to dramatically alter the impact of COVID-19, the impact it’s had on this country and our people,” Pres. Biden said of the pills.

Pres. Biden, though, is also facing new pressure to ease a nationwide testing shortage, as people seek to determine if they or their family members have been infected with the variant. Long lines and chaotic scenes over the holidays marred the administration's image as having the pandemic in hand.

“On testing, I know this remains frustrating. Believe me it's frustrating to me, but we're making improvements,” Pres. Biden said.

In a reversal, the White House announced last month that it would make 500 million rapid antigen tests available free to requesting Americans, but it will be weeks, if not months, before those tests are widely available. The administration notes those tests are on top of existing supply of rapid tests and that even a small increase will help ease some of the shortages. Additionally, private insurers will be required to cover the cost of at-home tests starting later this month.

Test manufacturers have until Tuesday night to respond to the government's contract request, and the first awards are expected to be made this week, Psaki said. Meanwhile, the administration is still developing a system for Americans to order the tests as well as a means to ship them to people's homes.

“We’ll set up a free and easy system, including a new website to get these tests out to Americans,” COVID-19 coordinator Jeff Zients said last week. “We’re actively working to finalize that distribution mechanism, which includes a website where people will be able to order tests for free. And we’ll share more details in the weeks ahead -- days and weeks ahead.”

Pressed when the first tests would reach Americans, Psaki said, “I don’t have an update on that at this point in time."

In a Monday letter, GOP Sens. Richard Burr and Roy Blunt, the top Republicans on the Senate Health, Education, Labor and Pensions Committee and the Appropriations Subcommittee on Labor, Health and Human Services, pressed the Department of Health and Human Services for answers on how the administration was working to address nationwide testing shortages.

“With over $82.6 billion specifically appropriated for testing, and flexibility within the department to allocate additional funds from COVID-19 supplemental bills or annual appropriations if necessary, it is unclear to us why we are facing such dire circumstances now," they wrote. “It does not appear to be because of lack of funding, but a more fundamental lack of strategy and a failure to anticipate future testing needs by the administration.”

White House officials have noted that the spike in testing demand is driven not just by omicron, but by people seeking to travel safely during the holidays and return to school after, and that the shortages are global in nature.

“Turns out, Omicron is driving a spike in demand for testing...everywhere,” tweeted Ben Wakana, the deputy director of strategic communications & engagement for the White House's COVID-19 response team, highlighting similar shortages in the U.K., Canada and Australia.