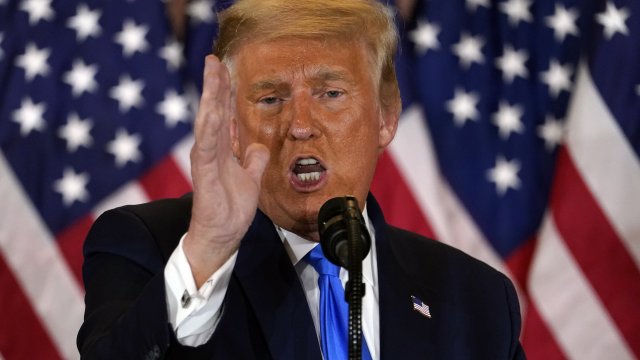 The president has launched a leadership PAC and has been making calls to right-leaning Newsmax in signs he wants to remain a political power.

Battleground states are certifying election results and government agencies have acknowledged Joe Biden's win. But President Trump is still waging election legal battles with no clear way forward and lingering questions about what the final weeks of his presidency will look like.

"President Trump is completely out of legal options," said Todd Belt of George Washington University. "The only thing he really has left is to try to pressure some Republican legislatures to appoint Republican electors to the Electoral College. He's made some overtures to do that in Michigan, but that didn't go very well. And it's unlikely that now that the certifications have happened in the states, that that will go anywhere."

His campaign continues to employ some staff working on the remaining legal battles. Though in the weeks after the election, most staffers have been let go at Trump campaign headquarters in northern Virginia. Something that is normal after an election.

Outside of tweets, President Trump has remained largely hunkered down in the White House, making just a few brief appearances with no direct mention of his election loss. But there are signs he is thinking about his influence after the presidency, launching a leadership PAC and making calls to right-leaning Newsmax.

"I think certainly by the midterms in 2022, he would be a very important political force for the Republican Party," Belt added.

Any illusions of staying in the White House however were dealt a serious blow on Monday when GSA Administrator Emily Murphy acknowledged Biden as the apparent winner of the 2020 election after stalling for weeks.

The President tweeted his support of the initial step but did not concede the race. It's the product, Belt says, of Republicans slowly beginning to recognize President-elect Biden.

"Every senator should stand up [and] decide for themselves what they believe in their heart is the right thing not make political calculations but make personal ones that are in the best interest of the country," said Trump ally Chris Christie.

Legal challenges have to be sorted out by December 8th, and states have to certify their results ahead of the Electoral College vote on December 14th. Willie James Inman, Newsy, Washington.