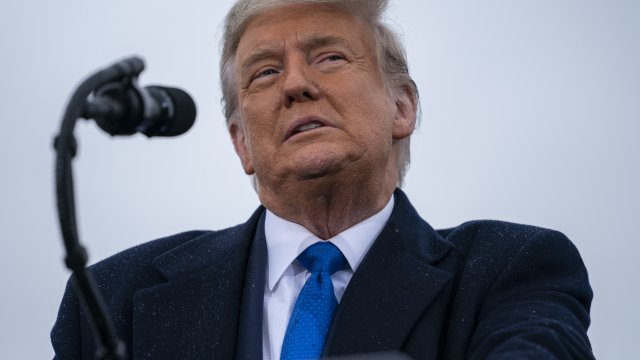 Seniors helped propel President Trump to the White House in 2016, but polls show they're moving away from the incumbent.

Seniors typically turn out to vote, and even with a pandemic, 2020 won't be any different.

That was President Trump at a recent campaign stop at the The Villages in Florida, working to shore up his support with the key group of voters as polls show Democratic nominee Joe Biden closing the gap among voters like 64-year-old Joyce Hubbard..who told Newsy she was most concerned about health care, the pandemic and the president's character.

"The last four years, this country has been torn apart," said Hubbard. "I have voted Democrat, I have voted Republican, I have voted independent. But this year I am definitely voting Democrat again."

Hubbard changed her voter registration from independent to Democrat last year, largely based on issues she cares about. She's part of the group that will help decide a key swing state.

In 2016, President Trump won voters 55 and older. In 2020, Joe Biden is performing better among seniors nationally and leads the president amongst voters 65 and older. The same trend applies to states like Pennsylvania, Michigan and Wisconsin. The polling margin is closer in other battlegrounds. Experts point to one major factor behind the shift in candidate choice.

"I think the logical suspect is the pandemic," said political science Professor Chris Borick. "Seniors certainly think this issue is important. It's more salient to that group than any other group of Americans. Their ratings of the president's handling of the pandemic are very negative."

"Together we rose to meet the challenge."

The Trump campaign and the RNC recently announced a $55 million ad campaign in the final stretch of the election that would in part focus on seniors. The ads defend the president's handling of the pandemic and touch on prescription drug costs, Social Security and Medicare.

Some of the president's most vocal senior citizen supporters say he's done a good job despite what polls say.

"Well, I think there were a lot of unknowns," said Sande Constintine. "I think he rolled up his sleeves and got in there and listened to his advisers and did the best and the most appropriate things for this country."

Like in many battleground states across the country, here in North Carolina, where President Trump recently campaigned, Joe Biden's success in polling seems to be backed up by not only seniors but also women in particular. So both candidates will likely try to get out their message with just days left before Election Day. Willie James Inman. Newsy. Gastonia, North Carolina.