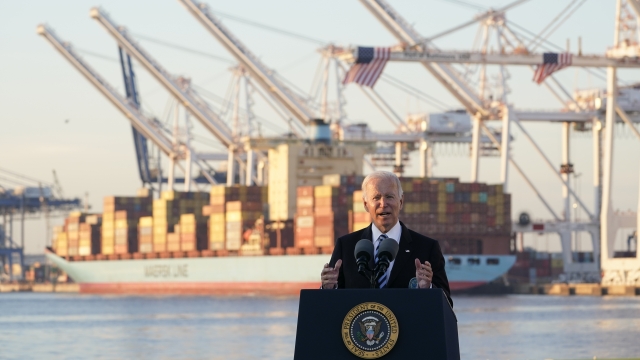 He highlighted his plan for funding in the bipartisan infrastructure bill, calling ports critical to the nation's economy.

Bare shelves and frustrated customers unable to find common items like spray paint, electric boxes, and plastic tarps. Scenes like this are becoming common at Falkenhan's Hardware in Baltimore.    "It's just crazy because I've never dealt with anything like this," owner Deborah Falkenhan said. "I'm in my 24th year and never had to deal with something like this where I couldn't get product."

Falkenhan's family has run this independent hardware store since the 1960s and is now dealing with the same supply chain problems that are hampering both businesses and consumers throughout the country.

"Well, you have to kind of explain to the customer that we can't get it," Falkenhan said. "If my supplier doesn't have it, my supplier can't get it if it doesn't come into the country or it isn't made where they can get it, where it's made in the United States."

Now, the Biden administration is announcing new steps aimed at easing the supply chain crunch at the nation's ports.

The move will allow pop-up storage sites for containers coming through the port of Savannah, Georgia — one of the nation's largest. It will also launch a review process to speed up the distribution of grant funding going to ports from the bipartisan infrastructure bill.

President Biden highlighted the plan during a visit to the Port of Baltimore Wednesday, calling ports critical to the nation's economy.

"It's going to modernize our ports with $17 billion in investment," he said. "We're going to reduce congestion, we're going to address repair and maintenance backlogs, deploy state-of-the-art technology and make our ports cleaner and more efficient."

And that's something the executive director of the Maryland Port Administration agrees with.

"It's absolutely helpful to have that federal funding," William Doyle said. "It's worth the taxpayers' investment to invest in ports, and that's what's going on right now. Because the more ports that you have in the United States of America, the more choices you have and the local economy, the consumers can get their goods faster, more efficiently."

Doyle expects funds from the infrastructure bill to be used for future projects.

The Port of Baltimore is already set to beef up operations early next year with four new massive electric cranes that arrived earlier this year.

"We can receive the largest ships that can fit through the Panama Canal," Doyle said. "So we have that ability. And we have been exercising that ability [and] making further investments."