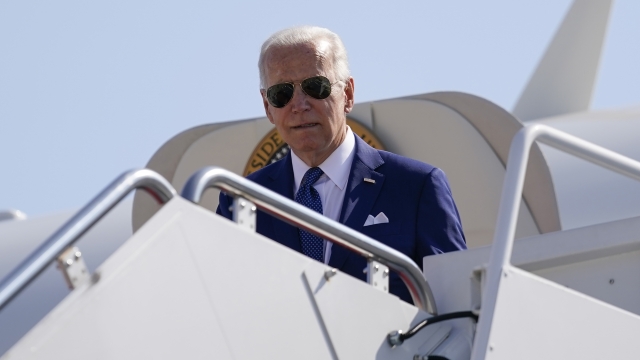 Over half of voters say they want to see nationwide gun policy made stricter, according to an Associated Press survey.

One of the Senate's loudest voices in favor of stricter gun control laws said Sunday that Democrats do not have enough votes to pass an assault weapons ban but said they might be able to get something done on guns next year, if they can keep Georgia's senate seat blue.

"Does it have 60 votes in the Senate right now? Probably not. Let's see if we can try to get that number as close to 60 as possible. If we don't have the votes, we'll talk to Senator Schumer and maybe come back next year with maybe an additional Senator and see if we can do any better," said Sen. Chris Murphy.

Last week, President Joe Biden again said he was going to "try to get rid of assault weapons" following the shooting at an LGBTQ+ nightclub in Colorado Springs.

"The idea, the idea we still allow semi-automatic weapons to be purchased is sick, just sick. It has no social redeeming value. Zero, none. Not a single solitary rationale for it, except profit for the gun manufacture," said President Biden.

CDC data shows a spike in gun violence since the pandemic, with gun-related homicides increasing across the country in metro and rural areas.

Over half of voters say they want to see nationwide gun policy made stricter, according to an Associated Press survey. About 30% said they want gun policy kept as it is.

This summer, the House passed a ban on the sale, import, manufacture, transfer, or possession of many types of semi-automatic guns and large capacity ammunition feeding deceives. However, the Bill hasn't been taken up in the Senate.

Colorado's Gov. Jared Polis on Sunday declined to support President Biden's call for a nationwide ban on assault weapons, saying lawmakers should look at the issue from

"I think what you really need to do if you're serious about reducing these kinds of gun violence events and mass violence events is try to take the best ideas from all sides that work," said Polis.

Polis said he will "take a hard look" at why Colorado's "Red Flag Law" did not stop the shooting at Club Q and said the law may need to be expanded.

"We're certainly going to take a hard look at why red flag law wasn't used in this case and the case of the King Soopers shooter, what can be used to better publicize, make available, add different parties to make sure that it's used when it should be used," said Polis.

President Biden is trying to drive up pressure on Congress to pass stricter laws, though such efforts failed in the wake of past violence.

Police reports show the suspect was known to law enforcement previously. They responded to a bomb threat in June 2021 reported by the suspect's mother.

But neither law enforcement nor any family member triggered the state's "Red Flag Law," which allows families or police to ask a judge to temporarily confiscate a person's guns if they are deemed a threat to themselves or others.

Polis says the state needs to do a better job of publicizing the law.

"We also need to make sure that we publicize the law and make sure that the tools are in people's hands when they need it to remove dangerous weapons that could be used for self-harm or harming others from somebody who's in a mental health crisis," said Polis.

And Murphy suggested lawmakers should withhold funding for local law enforcement in counties where the "Red Flag Law" is not being enforced.

"That is a growing problem in this country. And I think we're going to have to have a conversation about that in the United States Senate. Do we want to continue to supply funding in law enforcement in counties that refuse to implement state and federal gun laws?" said Murphy.