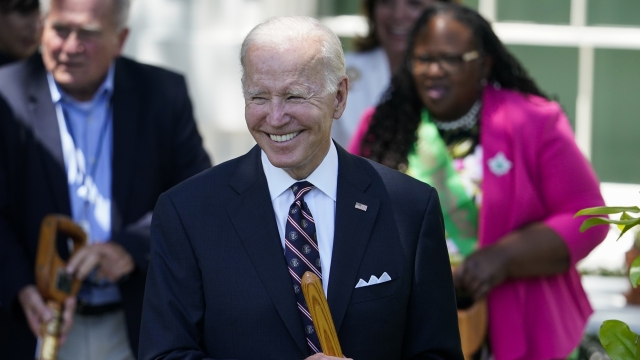 The White House says the two plan to discuss the state of the U.S. and global economy, as well as rising inflation.

President Joe Biden is set to meet with Federal Reserve Chairman Jerome Powell as soaring inflation takes a bite out of Americans' pocketbooks.

The meeting Tuesday will be the first since President Biden renominated Powell to lead the central bank and comes weeks after his confirmation for a second term by the Senate.

The White House said the pair would discuss the state of the U.S. and global economy and especially inflation, described as President Biden's “top economic priority." The goal, the White House said, is a “transition from an historic economic recovery to stable, steady growth that works for working families.”

Many top economists believe the U.S. is nowhere near a recession this year.

Inflation in the U.S. hit a 40-year high earlier this year, amid supply chain constraints caused by the global economy's recovery from the pandemic and Russia's invasion of Ukraine.

But the economy saw a welcome bit of data Friday, as the Commerce Department said inflation rose 6.3% in April from a year earlier, the first slowdown since November 2020 and a sign that high prices may finally be moderating, at least for now.

The inflation figure was below the four-decade high of 6.6% set in March. While high inflation is still causing hardships for millions of households, any slowing of price increases, if sustained, would provide some modest relief.

Powell has pledged to keep ratcheting up the Fed’s key short-term interest rate to cool the economy until inflation is “coming down in a clear and convincing way.” Those rate hikes have spurred fears that the Fed, in its drive to slow borrowing and spending, may push the economy into a recession. That concern has caused sharp drops in stock prices in the past two months, though markets rallied last week.

Powell has signaled that the Fed will likely raise its benchmark rate by a half-point in both June and July — twice the size of the usual rate increase.