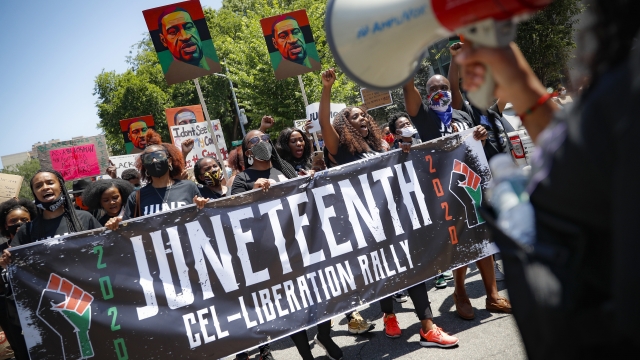 The Senate passed the bill yesterday under a unanimous consent agreement that expedites the process for considering legislation.

The United States will soon have a new federal holiday commemorating the end of slavery.

The House voted 415-14 on Wednesday to make Juneteenth, or June 19th, the 12th federal holiday, and President Joe Biden is scheduled to sign the bill into law on Thursday.

Juneteenth commemorates June 19, 1865, when Union soldiers brought the news of freedom to enslaved Black people in Galveston, Texas — two months after the Confederacy had surrendered. That was also about 2 1/2 years after the Emancipation Proclamation freed slaves in the Southern states.

"Our federal holidays are purposely few in number and recognize the most important milestones," said Rep. Carolyn Maloney, D-N.Y. “I cannot think of a more important milestone to commemorate than the end of slavery in the United States."

Rep. Sheila Jackson Lee, D-Texas, speaking next to a large poster of a Black man whose back bore massive scarring from being whipped, said she would be in Galveston this Saturday to celebrate along with Republican Sen. John Cornyn of Texas.

"Can you imagine?" said the rather short Jackson Lee. "I will be standing maybe taller than Sen. Cornyn, forgive me for that, because it will be such an elevation of joy."

The Senate passed the bill a day earlier under a unanimous consent agreement that expedites the process for considering legislation. It takes just one senator’s objection to block such agreements.