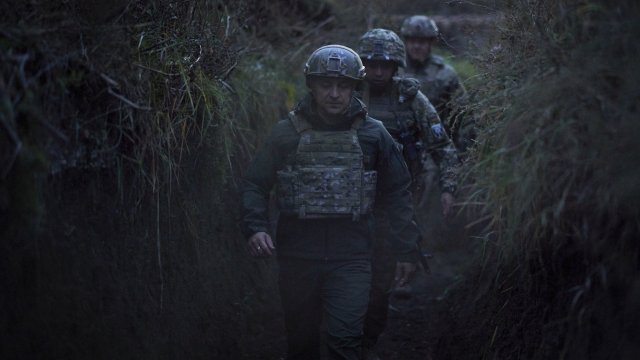 U.S. intelligence officials said Russia is planning to deploy 175,000 troops near Ukraine in preparation for a possible invasion.

President Biden and his Russian counterpart Russian President Vladimir Putin have now had their second meeting since their summit in Geneva.

This time, they’re talking through screens, but the stakes are even higher. Beyond cybersecurity and the Iran nuclear deal are fears that Russian troops could invade Ukraine in a matter of weeks.

No agreements were announced after President Biden's virtual meeting with Putin.

"President Biden looked President Putin in the eye and told him today that things we did not do in 2014 we are prepared to do now," National Security Adviser Jake Sullivan said.

U.S. officials hope the president's threats of stiff sanctions will weigh into Putin's calculation of whether to invade Ukraine.

Fears have mounted as troops have massed on their shared border.

"To me, the most likely place where we would see the emergence of additional Russian ground forces would be out of the Crimean Peninsula, so that they can begin to isolate Ukraine from the Black Sea and Sea of Azov," said Ben Hodges, Former Commander of U.S. Army Europe.

Tuesday’s two-hour video call came after the U.S. intelligence community assessed the Kremlin plans to launch an offensive early next year, with 175,000 troops.

"It will be preceded by and accompanied by extensive cyberstrikes to paralyze Ukrainian transportation and command and control capabilities," Hodges said.

Russian officials have denied plotting an incursion, and Putin seeks a guarantee that NATO stop expanding and refrain from sending weapons and troops to Ukraine, a new "red line."

The Biden administration has been sending warnings to Moscow, including unprecedented economic costs.

"We would be prepared to implement measures that we have not implemented in the past," said Ned Price, Spokesperson for the U.S. State Department.

But some analysts believe Putin seized an opportune moment — when Europe is depending on Russian gas for the winter, threatening unity for sanctions, when Germany, a strong leader, is changing helms and when Americans likely wouldn't support military action to protect Ukraine.

"It's not something that the American public would agree and accept, and it cares so much to Putin," Kendall-Taylor said. "So the question is really, how do you deter when there's such an asymmetry of interests?"

Senior U.S. administration officials say anti-Ukrainian disinformation is approaching a level seen nearly eight years ago, when Russia annexed Crimea from Ukraine, and fomented a war in the east that has since claimed the lives of 14,000 people.