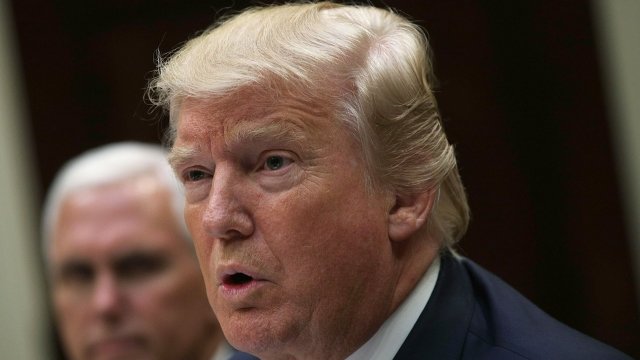 Monday night, President Donald Trump invited senators to the White House to hammer out a way to save the GOP alternative to the Affordable Care Act, aka Obamacare.

According to someone briefed on the meeting, President Trump essentially told senators: "If we don't do this, we're in trouble. We have the Senate, House and White House, and we have to do it or we're going to look terrible."

And right as that dinner was wrapping up, the Senate's attempt to repeal and replace Obamacare died.

Two more Republican senators have announced their opposition to the current version of the bill.

That's because conservative Sens. Mike Lee and Jerry Moran — who weren't at the dinner with the president — were releasing and tweeting statements that they were joining the "no" column, which in effect killed the bill. Those statements were complete surprises to the leadership, including the president.

"We thought they were in fairly good shape. ... And, you know, everybody has their own reason," the president said Tuesday in a press conference.

Before Moran and Lee dropped, the Senate bill's chances were still up in the air. Senate Majority Leader Mitch McConnell was working behind the scenes to bring a coalition together.

The president has consistently hit roadblocks to repeal and replace Obamacare. But how much does Trump really care about getting a better health care bill?

Sources tell Politico: not much. People close to the president said repealing Obamacare is a matter of "winning," and the president isn't very concerned with the specifics.

Late Monday night the president tweeted that Republicans should just pass a clean repeal bill and replace Obamacare later on. But not even 24 hours later, enough GOP senators have come out against that plan to kill it — at least for now.