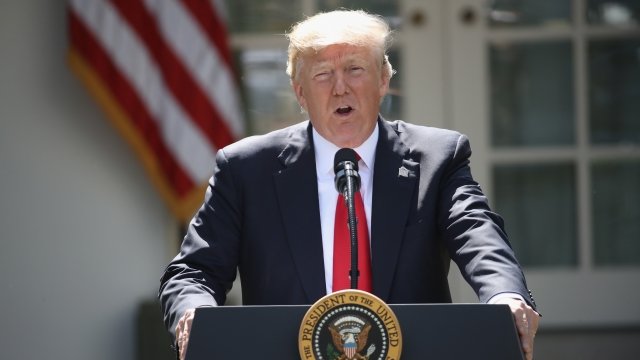 On Sunday morning, President Donald Trump tweeted an edited video that shows him beating up a caricature of CNN. Then, the reactions poured in.

"It is an incitement to violence. He is going to get somebody killed in the media," CNN commentator Ana Navarro said on ABC News' "This Week."

BBC America anchor Katty Kay said: "We had Sarah Huckabee Sanders specifically coming out in the White House and, for a rare on-camera press briefing, saying that the president has never condoned or encouraged or promoted violence. That is exactly what he's just done."

The GIF appears to have originated with a Reddit user who frequents /r/the_donald, a subreddit that's dedicated to posts about the president but also contains a lot of hate speech.

It wasn't immediately clear what influenced Trump's tweet. But critics have accused him of using social media as something of a game of distraction before.

And New York Times reporter Glenn Thrush points out this could be an attempt to get into a public squabble with CNN so gruesome, it rallies Trump's most ardent supporters.

COVFEFE Act Could Prevent President Trump From Deleting His Tweets

While the tweet itself is abnormal for a person with Trump's job, it also got a lot of people talking about Twitter's harassment policy.

Those rules read, in part: "You may not make threats of violence or promote violence, including threatening or promoting terrorism."

Whether or not the president's tweet actually violates those rules is a gray area. Given no outside litigation, it'd be up to Twitter to make that call.

As of Sunday afternoon, the White House hadn't responded to Trump's tweet. But their responses to Trump's provocative tweets tend to be pretty uniform.

"I don't think that it's a surprise to anybody that he fights fire with fire," deputy press secretary Sarah Huckabee Sanders said in a press briefing. "He's not going to sit back and be attacked by the liberal media, Hollywood elites. And when they hit him, he's going to hit back."