Philippine President Duterte Had Some Choice Words For US Ambassador 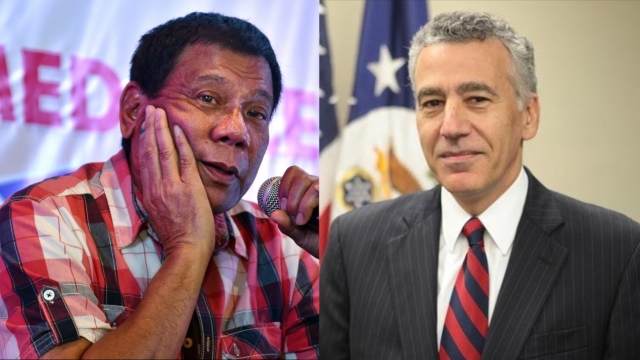 President Rodrigo Duterte made a less than tactful statement about the U.S. Ambassador to Manila.

The 71-year-old called U.S. Ambassador to the Philippines Philip Goldberg "gay" and a "son of a -----" in the language of Tagalog.

Why the ill will? During his campaign, Duterte made a joke about rape. Goldberg responded in an interview saying he didn't condone the comments.

So, Duterte reportedly accused Goldberg of meddling in the election.

During a recent speech to soldiers, Duterte said he mentioned his dislike of Goldberg to U.S. Secretary of State John Kerry.

Duterte also reportedly described Kerry as "crazy," saying, "Kerry came here, we had a meal, and he left me and Delfin $33 million. I said, 'OK, maybe we should offend them more, so this crazy will just give more money, just to make peace.' So, it's all about the money."

As you can imagine, the U.S. Department of State isn't thrilled with the comments.

SEE MORE: In The Philippines, Dealing With Drugs Could Be A Death Sentence

"We've seen those inappropriate comments made about Ambassador Goldberg. He's a multi-time ambassador, one of our most senior diplomats. We've asked the Philippine charge to come into the state department to clarify those remarks," Director of the Office of Press Relations Elizabeth Trudeau said.

Duterte took office in June. He has gained international attention for his — shall we say — less than tactful comments.

During the campaign, he encouraged people to kill drug dealers, and earlier this week said he "doesn't care about human rights."