When Will President Biden Sign The $1.2 Trillion Infrastructure Bill? 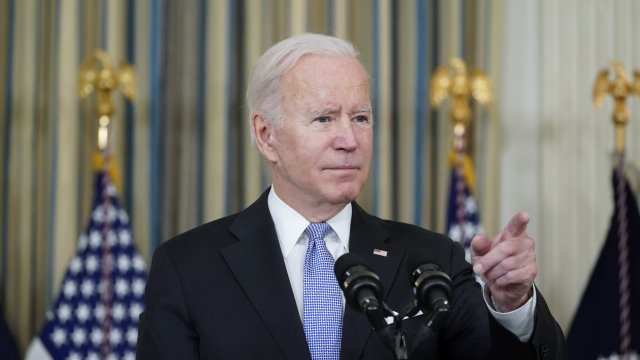 The passing of this infrastructure bill is a big win for President Biden following low approval ratings and recent election losses.

VERONICA DE LA CRUZ: The House passed the $1.2 trillion infrastructure bill Friday and sent it to the president's desk for his signature. Our Kellan Howell, who is the White House correspondent, joins us now live from Washington. Kellen, when can we expect the president to sign this bill? We know that he went to Delaware for the weekend. Is he back in the nation's capital?

KELLAN HOWELL: Good morning Veronica. So the president will be returning to the White House today, but there's no signing ceremony scheduled for this bill today. The president made some remarks and said that he was eager to get it signed soon but that he wanted to do it in a ceremony that could include some of the key players that really helped contribute to the success of this bill. And that includes both Republicans and Democratic lawmakers.

Both the House and the Senate are on recess this week. They won't be back in town until next week. So it's possible we may have to wait until next week for a signing ceremony on this. But in the meantime, the president also says that he's going to be getting out on the road.

He, as well as other folks like the Vice President and the first lady getting out to sort of really tout the success of this bill. We're expecting to see President Biden visit the port of Baltimore on Wednesday where he's going to be talking about the ways that the funding from this bill will be a great investment in that area and in that port.

DE LA CRUZ: In the meantime we know the president's been suffering from a lower approval number. I believe that rating is 38%. So how is the passing of this infrastructure bill a big win following both his approval ratings and also recent election losses?

HOWELL: Yes, Veronica, this really is a big boost. You know, the passage of this bill couples with also some good news in the last week on the vaccines and the pandemic, as well as good jobs numbers coming out of the end of last week. All of these things are really a really good boost for the president coming off of those low approval ratings as you said. And the president spoke about this this weekend and said that, you know, it really shows the American people that Democrats can come together with Republicans and they can get major deals done. They can make things happen like they said they would do on the campaign trail. So I think this is a really huge win in that regard, but we still need to see what's going to happen with the second part of the president's domestic agenda. And that's that "Build Back Better" framework that didn't end up getting a vote on Friday, as we had originally thought it would. The House did vote to begin debate on that bill. So that means that when they do come back to the capital, they are ready to get going, really hit the ground running to debate that bill and hopefully get to a vote on that one soon.