President Obama 'Forbidden' To Use iPhone 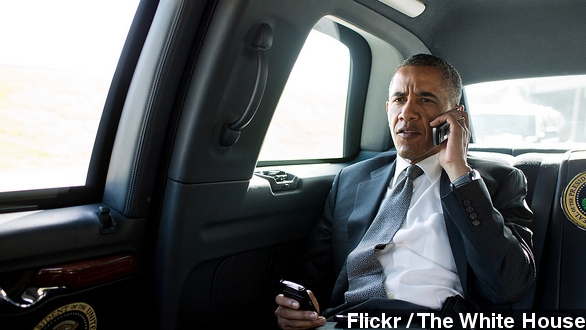 It turns out there's a reason President Obama has a BlackBerry: security. He says he's not allowed to have an iPhone but does have an iPad.

It turns out there's a reason President Barack Obama carries around a bulky BlackBerry: security.

"He actually said while he was pitching the Affordable Care Act to young people that it's for security reasons that he doesn't have an iPhone and that he still has a BlackBerry. He's been very loyal to the brand." (Via CNN)

Time says that while companies like Apple trump BlackBerry, the brand remains popular among Washington officials because of its strong encryption.

BlackBerry's website explains some of the security features, saying that before the device sends a message, it compresses and encrypts it using a master encryption key unique to each BlackBerry device.

So the prez isn't hating on Apple by any means, but back in 2009 he made his brand preference known.

"I'm still clinging to my BlackBerry. ... They're going to pry it out of my hands." (Via The New York Times)

Obama's love for the device is so well-known, it's in a book. We aren't kidding. It's called "Obama's BlackBerry."

"Obama also reportedly has a personal email address that's limited to a small group of senior officials and close friends."

To further prove the chief of state has no beef with Apple, the Obama daughters, Sasha and Malia, have iPhones complete with trendy cases.

"The president says he's a fan of the late Steve Jobs and even has an Apple iPad." (Via CBS)