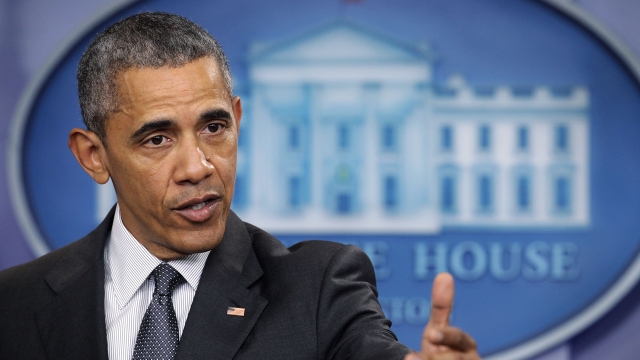 "You want to give me a good send-off? Go vote."

In a speech given at the Congressional Black Caucus Foundation dinner on Saturday, Obama said a Trump presidency would be an insult to his legacy. He also took a few moments to mock the Republican nominee.

"He says we've got nothing else to lose. So we might as well support somebody who has fought against civil rights and fought against equality," Obama said.

SEE MORE: Democrats Might Be Cutting Losses In Florida And Ohio Senate Races

The current commander in chief criticized what many refer to as Trump's fear tactics to gain support from certain groups of voters. And he had a sarcastic comeback for Trump's suggestions about the poor state of black America.

"I mean, he missed that whole civics lesson on slavery and Jim Crow," Obama said.

The speech came only a day after Trump publicly acknowledged Obama was born in the U.S. Trump used the "big announcement" to gain publicity for the opening of his new hotel.

Obama responded to Trump's confirmation of his birthplace by saying, "In other breaking news, the world is round, not flat."

The 2016 presidential race is tight. Trump and Clinton have basically been tied for quite some time, and in recent weeks, Trump has gained some traction.

But Obama might not have much to worry about. Several polls in recent months show Trump's favorability among black voters hovering around zero percent.

During his remarks, President Obama emphasized what he believes is at stake in this election — progress. So he asked his supporters for one final favor.

"You want to give me a good send-off? Go vote."