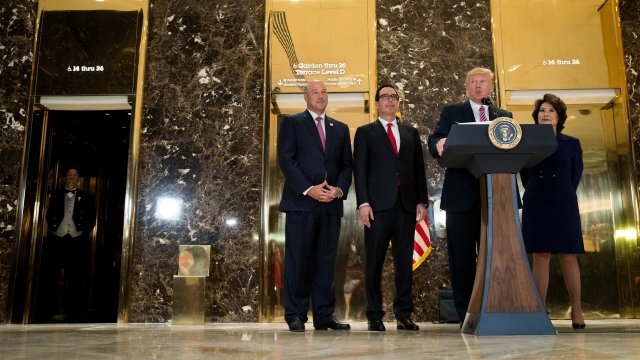 Members of the President's Committee on the Arts and Humanities announced their resignation from the group in a letter Friday.

Yet another presidential advisory group has deteriorated after Donald Trump's response to the violence in Charlottesville, Virginia.

Members of the President's Committee on the Arts and Humanities wrote in a letter to Trump on Friday:

That committee was designed to advise the White House on cultural issues. Several prominent people belonged to the group — including artist Chuck Close, author Jhumpa Lahiri, actor Kal Penn and Vicki Kennedy, the widow of the late Sen. Ted Kennedy.

Trump Goes After Former Members Of His Advisory Council

Several CEOs on Trump's manufacturing advisory council have stepped down, citing his reaction to Charlottesville violence.

The announcement comes just two days after Trump said he was shutting down two of his business advisory councils as a slew of CEOs resigned.

Many of them also cited Trump's controversial comments about Charlottesville as their reason for leaving.

The 17-member President's Committee on the Arts and Humanities was appointed by President Barack Obama and has yet to meet under Trump.