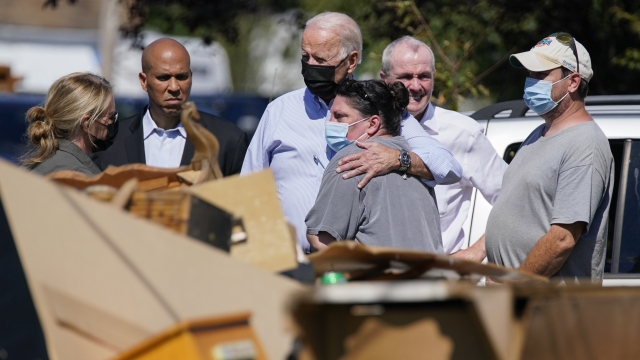 The White House has asked Congress for an additional $24 billion to cover the costs of Hurricane Ida and other natural disasters.

Pointing accusingly at climate change, President Joe Biden toured deadly Northeast flood damage Tuesday and said he was thinking about the families who suffered "profound" losses from the powerful remnants of Hurricane Ida.

President Biden was in New Jersey, and planned to visit New York City, to survey the aftermath and call for federal spending to fortify infrastructure to better defend people and property from future storms in the region and far beyond.

President Biden said the threat from wildfires, hurricanes, tornadoes, flooding and other extreme weather must be dealt with in ways that will lessen the devastating effects of climate change.

"We can't turn it back very much, but we can prevent it from getting worse," he said. President Biden added that scientists have been warning for decades that this day would come and that urgent action was needed.

President Biden's plan to spend $1 trillion on infrastructure nationwide is pending in Congress., and the White House asked Congress on Tuesday for an additional $24 billion to cover the costs of Hurricane Ida and other natural disasters.

In New Jersey, he also walked along a street in the Lost Valley neighborhood of Manville, where cleanup continues after the Raritan River overflowed its banks. Many front lawns were covered with water-logged couches, pianos, crumbled plaster and other debris.

One home displayed a hand-painted sign that said, "Manville will be back better."

President Biden, wearing a mask, spoke to adults and children, including a woman who stood in front of her home that was destroyed by fire as the flood occurred. She told the president she and her husband had left early because they have a baby.

At the briefing, President Biden focused on the personal calamities, saying, "The losses that we witnessed today are profound. My thoughts are with all those families affected by the storm and all those families who lost someone they love."

Before he arrived, Cristel Alvarez said she expected losses at her home to climb as high as $45,000. She has lived in Manville for a decade and the flood was her family's second. Alvarez said she planned to apply for federal assistance but also intended to move away.

"Let him see everything that we're going through and hopefully we can get the help that we need because there's a lot of loss," she said.

Lou DeFazio, a contractor and three-decade resident of Manville, sat on his porch with a small Trump flag waving beside him and Kaycee, his dog barking through an open window. DeFazio said the town needs better planning instead of presidential visits.

"I think their efforts could be better spent in other areas. I don't know what they're gonna do for us," he said.

At least 50 people were killed in six Eastern states as record rainfall last week overwhelmed rivers and sewer systems. Some people were trapped in fast-filling basement apartments and cars, or were swept away as they tried to escape. The storm also spawned several tornadoes.

More than half of the deaths, 27, were recorded in New Jersey. In New York City, 13 people were killed, including 11 in Queens.

President Biden's visit follows a Friday trip to Louisiana, where Hurricane Ida first made landfall, killing at least 13 people in the state and plunging New Orleans into darkness. Power is being slowly restored.

Manville, situated along New Jersey's Raritan River, is almost always hard-hit by major storms. It was the scene of catastrophic flooding in 1998 as the remnants of Tropical Storm Floyd swept over New Jersey. It also sustained serious flooding during the aftermath of Hurricane Irene in 2011 and Superstorm Sandy in 2012.

President Biden also used his appearance in Louisiana to argue for his infrastructure plan.

Past presidents have been defined in part by how they handle such crises, and President Biden has seen several weather-induced emergencies in his short presidency, starting with a February ice storm that caused the power grid in Texas to fail. He has also been monitoring wildfires in the West.

The White House has sought to portray President Biden as in command of the federal response to these natural disasters, making it known that he is getting regular updates from his team and that he is keeping in touch with governors and other elected officials in the affected areas.

As president, Trump casually lobbed paper towels to people in Puerto Rico after Hurricane Maria's devastation in 2017, generating scorn from critics but little damage to his political standing. Barack Obama hugged New Jersey Republican Gov. Chris Christie after Superstorm Sandy in 2012, a brief respite from partisan tensions that had threatened the economy. George W. Bush fell out of public favor due to a poor response after Hurricane Katrina swamped New Orleans in 2005.