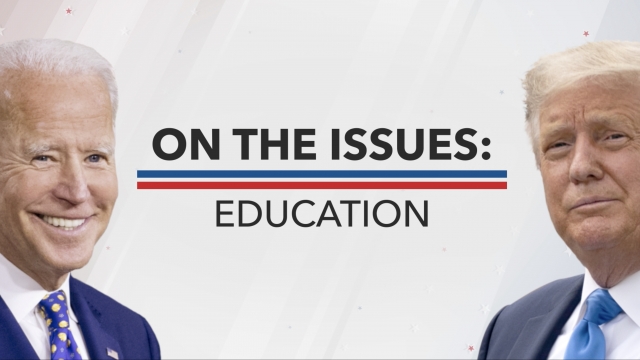 Education has ricocheted to the forefront of the campaign as President Donald Trump and Democratic nominee Joe Biden debate how to safely reopen schools.

While each support getting students back in buildings, their plans on how to go about it have differed.

"We're very much going to put pressure on governors and everybody else to open the schools,” President Trump said on July 7.

“I’d be working with Congress now, today, to pass emergency packages for schools so they have the resources they need to open safely,” Biden said Sept. 2.

That includes charter schools, which are publicly funded and privately run.

“Charter schools have been incredible, but they’re under attack,” President Trump said July 9.

Biden supports stricter accountability for charter schools and closing locations operated by for-profit companies, which is about 12 percent.

And there are differences when it comes to higher education, too. Biden’s wife Jill is a community college professor who has already hosted education events on the campaign trail.

“She's been influential and was influential when he was vice president over his ideas on higher education,” said Doug Harris, the Schlieder Foundation Chair in Public Education at Tulane University.

Those ideas include offering free tuition at public higher education institutions for families making less than $125,000 per year.

The president’s reelection campaign called Biden’s plan quote “anything but free,” saying he should explain to Americans how much it would cost.