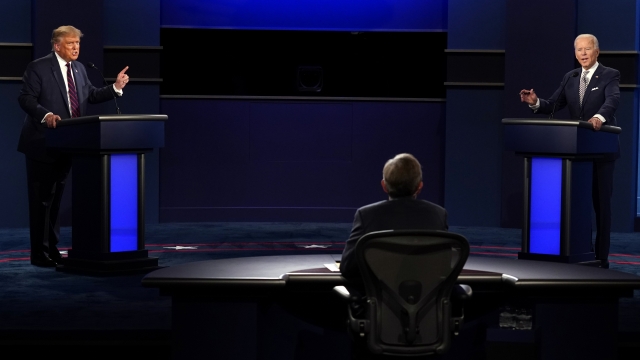 Moderator Chris Wallace struggled to keep order as the candidates argued about the pandemic, the economy and racism.

{Arguing between Biden and Trump.}

Moderator Chris Wallace struggled to keep the candidates from interrupting each other — with President Trump especially eager to cut in during Biden's answers.

Among the topics, a newly vacant Supreme Court seat, the economy and the US response to the coronavirus.

"By the way maybe you could inject some bleach into your arm and that would take care of it. This is the same man," Biden said. "I was being sarcastic and you know that," Trump said.

Civil unrest and race, too. Wallace asked the president if he would condemn white supremacists and militia who have counter demonstrated at Black Lives Matter protests. The president responded "I want to see peace" but added...

"Proud Boys — Stand back, stand by, but I'll tell you what, somebody's got to do something about Antifa and the left because this is not right-wing problem...This is a left wing problem," Trump said.

And about that New York Times report claiming he paid little in taxes in recent years...

"Is it true you paid $750 in federal income taxes each of those two years?" Wallace said. "I paid millions of dollars in income tax. Millions of dollars. And let me just tell you, there was a story in one of the papers, I paid 38 million dollars one year," Trump said.  "Show us, show us your taxes," Biden said. "We'll see it as soon as it is finished," Trump said.

He also spent much of the 90-minute debate attempting to tie Biden to socialism and radicals. Claims the Democrat repeatedly denied.

"What I'm going to do as president of the United States is call together an entire group of people at the White House. We'll have everything from civil rights groups, to police officers to the police chiefs and we are going to work this out," Biden said.

This fiery debate is just the first of three taking place between now and Election Day. But before we see these two square off again we will see their running mates take the stage in Salt Lake City on October 7.