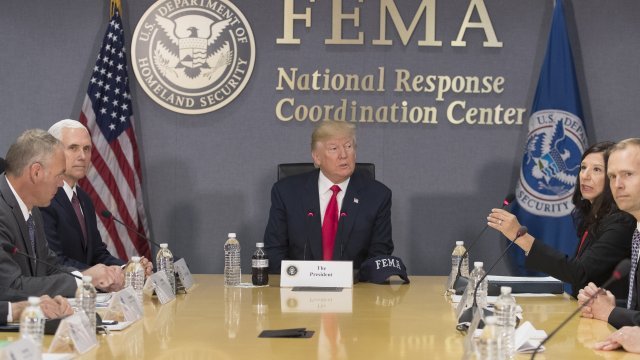 The president is still defending keeping his administration small, though his reasons for doing so have changed.

President Donald Trump continues to defend his small administration. Shortly after taking office, the president said he wouldn't be filling hundreds of administration positions because he wanted to to shrink the government. Then he told Twitter followers the vacancies were the fault of Democratic obstructionists. Now he's back to his original stance: Many positions just aren't needed.

But Hurricane Harvey is now shedding light on just how many empty spots there are: The Department of Homeland Security secretary position is open — Elaine Duke has temporarily stepped in since Gen. John Kelly left it to become chief of staff. The department's deputy position is vacant.

The director of DHS subsidiary FEMA, which is responsible for much of the Harvey relief management, has been on the job about two months and has no deputy.

The National Hurricane Center director and the National Oceanic and Atmospheric Administration directors positions are also vacant. The latter is the parent agency of the National Weather Service.

Many Republicans are favor a smaller federal government. They want to save taxpayer dollars and keep most power in the hands of the states. But political science Professor Shauna Shames says if the president wants to get rid of some positions, this is not the way to do it.

Shames says the Trump administration needs to get the vital positions filled so the government can function from the top down.