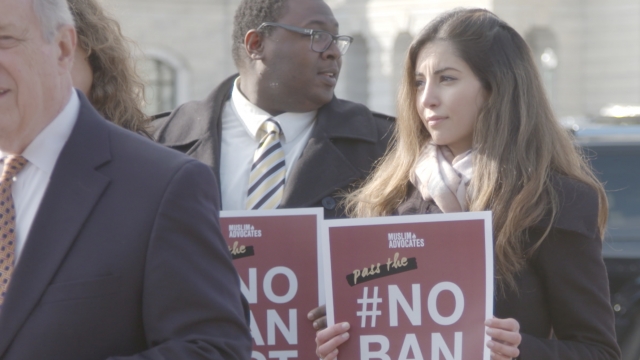 Acting Department of Homeland Security Secretary Chad Wolf says the U.S. will block diversity visas from Sudan and Tanzania and all immigrant visas from Eritrea, Kyrgyzstan, Myanmar, Nigeria. Non-immigrant visas, which are usually for visiting the U.S., will not be covered under the new restrictions.

"Sudan is a vastly Muslim-majority country [and] the other countries do have significant Muslim populations," said Farhana Khera, president and executive director of Muslim Advocates. "So the brunt of this ban will still be primarily borne by Muslim populations."

Wolf blamed issues with poor technology, plus a lack of sharing information about terrorism.

"These countries, for the most part, want to be helpful but ... simply failed to meet those minimum requirements that we laid out," he said.

Restricting immigrant visas for people from certain countries was a campaign pledge for the president. A week into his presidency, he imposed significant travel restrictions, which before today included citizens of six countries — Iran, Yemen, Syria, Somalia, Libya and North Korea — as well as certain government officials from Venezuela.

The largest group of people impacted by this expanded policy will likely be Africans.

"They do have conflict. There is no doubt they are fighting the terrorists that would attack their own domestic population," said U.S. Rep. Sheila Jackson Lee in a phone call with reporters. Lee is on the House Committee on Homeland Security and co-chairs the Congressional Nigerian Caucus.

"I believe there is a blatant, conspicuous discrimination coming out of this administration.”

By default, the travel restrictions prevent citizens from these countries from getting U.S. visas, though there are some limited exceptions. Still, the administration says those who are blocked are automatically considered for a waiver.

Newsy found the number of waivers granted has more than doubled in recent months.

The U.S. issued 7,679 total waivers in the first two years of the ban, which accounted for about 10% of applications.

The State Department tells Newsy a new processing system is approving applications more quickly, though it wouldn't detail exactly what has changed.

Even though there are more waivers being approved, the backlog of applications is still growing, now in the tens of thousands.

"Some of them have been waiting three years now for waivers, and during that time, they're separated from their families," Khera said. "Every day that goes by that a waiver isn't reviewed and granted is directly harming families here in our country."

This week, House Speaker Nancy Pelosi announced she plans to bring the No Ban Act to the House floor as soon as possible. The bill would prevent visa restrictions based on religion or nationality unless the administration can prove they benefit national security.