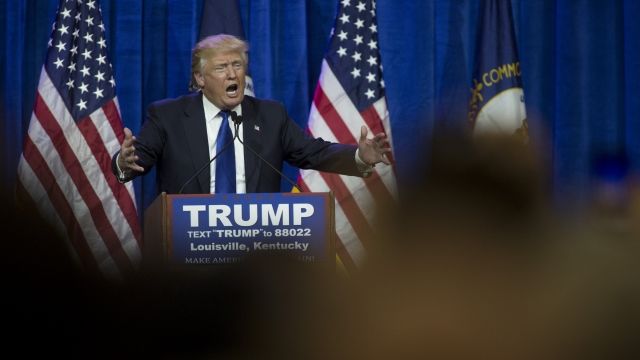 President Donald Trump is facing another lawsuit — this time over his rhetoric at a 2016 campaign rally in Kentucky.

It seems President Donald Trump is fighting a lawsuit that isn't about his businesses or the travel ban.

A federal judge in Kentucky decided that a year-old lawsuit against Trump and his campaign for an incident at a 2016 campaign rally can move forward.

At a March 1, 2016, rally in Louisville, Kentucky, three people showed up to protest Trump. They say the presidential candidate incited a riot against them when he said, "Get 'em outta here."

The protesters said Trump's supporters beat and shoved them in the ensuing scuffle.

Trump had been named in 42 suits during his first 11 days in office, according to CNN.

The lawsuit also names Matthew Heimbach, Alvin Bamberger and an unknown person as defendants. Those three people are accused of the actual physical assault at the rally.

The Trump team tried to get the lawsuit thrown out. Defense attorneys claimed Trump's request to "get 'em out of here" could easily have meant something else — like directing security officers to remove the protesters — and that his words are protected under freedom of speech.

But Judge David Hale decided not to dismiss the case. His ruling notes freedom of speech protection doesn't apply to comments that incite a riot — which might be the case here.

Hale did dismiss one count of the lawsuit that claimed vicarious liability. That count alleged Trump was responsible for the actions of the Trump supporters at the rally. The judge also decided the punitive damages count won't apply to Bamberger.

The Louisville episode is hardly an isolated incident. Throughout his campaign, Trump made other comments along the same lines.

Now, the case goes on to another judge for litigation. The plaintiffs are seeking an unspecified amount of damages.