Postal Union Worries USPS Being Undermined By Trump Ahead Of Election 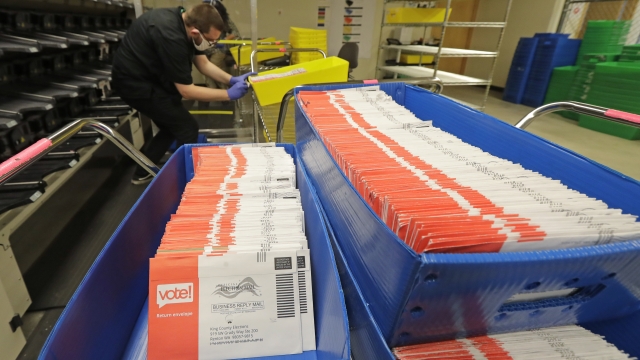 President Donald Trump wants to block funding for the U.S. Postal Service to curtail mail-in voting before the election.

"They need that money in order to make the post office work so it can take all of these millions and millions of ballots," President Donald Trump told Fox News.

The president wants to block funding for the U.S. Postal Service to curtail mail-in voting. He’s attacking House Democrats for including $25 billion in funding for the agency in their latest coronavirus recovery bill.

His comments Thursday morning came amid concerns that his administration is intentionally harming the Postal Service — months before people begin to rely on the mail to vote.

"The main changes we've seen in the last few weeks by the new postmaster general have been policies that actually slow down and delay mail," says Mark Dimondstein.

"We are concerned because this administration has a very clear political agenda, in terms of undermining and degrading the postal service. And now, unfortunately, trying to convince the people of the country that somehow mail in voting is fraudulent and corrupt when all the facts show just the opposite," Dimondstein says.

The president began falsely attacking mail-in voting months ago. But his criticism of the postal service dates back years -- recommending it be privatized in 2018.

He has praised the new Postmaster General, Louis DeJoy, a major Republican donor who started in June.

"As you will soon discover, I am direct and decisive, and I don’t mince words. And when I see problems, I work to solve them," DeJoy told the USPS.

Democratic lawmakers question whether White House and Treasury Department officials "inappropriately pressed” board members, who are Trump appointees, for his selection. Together with his wife, DeJoy reportedly holds tens of millions of dollars in assets of competitors to the USPS.

DeJoy recently denied that he was slowing down the mail or making decisions at the direction of the president. The Postal Service declined an interview, but a spokesperson told Newsy they “face an impending liquidity crisis.” The former postmaster general estimated the agency could run out of money by the fall.

Even before the overhaul started in July, an audit found delays and tracking problems with mailed ballots in Wisconsin’s primary election in April. It also identified “potential nationwide issues” for future elections, like the window of time states allow voters to request mail-in ballots.

"These deadlines sometimes do not provide enough time for the election office to generate the ballot, present it to the Postal Service, and for the Postal Service to sort and deliver that ballot before an election," says Todd Watson, audit director and the USPS Office of Inspector General.

A Newsy analysis found that during the pandemic, as thousands of mail carriers quarantined, not a single region across the country met USPS’s annual targets for first-class mail to be delivered on time, a trend that has continued since last year.