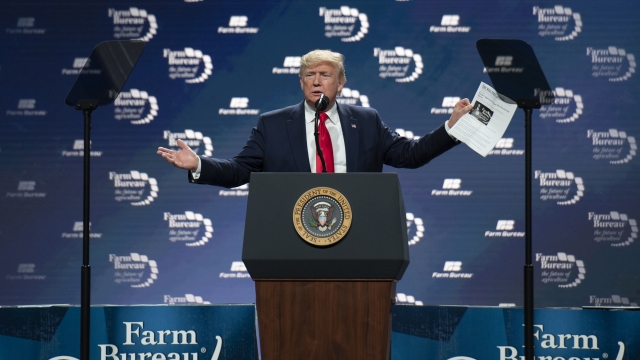 The president's lawyers say the articles of impeachment are "deficient on their face" in that they don't accuse him of breaking the law.

President Donald Trump's legal team is urging lawmakers to quickly reject the impeachment charges against the president, arguing in a brief filed Monday that he's done nothing wrong.

In the 171-page brief, President Trump's lawyers, led by White House counsel Pat Cipollone and the president's personal attorney Jay Sekulow, accused House Democrats of attempting "to overturn the result of the 2016 election and to interfere in the 2020 election." They said, "All of this is a dangerous perversion of the Constitution that the Senate should swiftly and roundly condemn."

His defense team made the submission, as required, a day before President Trump's impeachment trial is set to begin in earnest. It's essentially a preview of what his lawyers intend to argue on the Senate floor. His legal team also submitted a shorter document over the weekend in which it called the articles "constitutionally invalid."

One of its biggest arguments for a quick acquittal is that the articles of impeachment are "deficient" because they don't accuse the president of breaking the law. They also argue that the articles "would do lasting damage to the separation of powers."

The House's seven impeachment managers, led by Rep. Adam Schiff, filed their own brief Saturday, arguing that the president's actions posed a national security threat. They wrote: "President Trump's ongoing pattern of misconduct demonstrates that he is an immediate threat to the Nation and the rule of law. It is imperative that the Senate convict and remove him from office now, and permanently bar him from holding federal office."

The House voted to impeach the president in December. House Democrats believe President Trump abused his power by withholding military aid to Ukraine to pressure the country to announce an investigation into his political rivals, and that he obstructed Congress by refusing to release documents related to the House's impeachment inquiry.