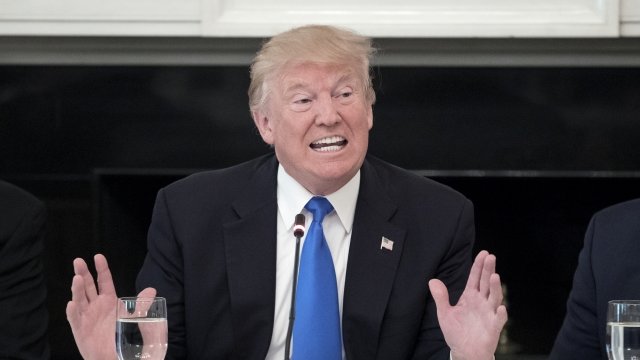 President Trump left reporters scratching their heads after his interview with The New York Times. When talking about health insurance, the prices he used were way off.

Some outlets speculated the president confused life insurance with health insurance because those numbers aren't close to what people actually pay for health coverage. And many people in their 20s with serious conditions can't wait until they're 70 to be covered.

This doesn't appear to be a one-time slip of the tongue. In May, he used a similar line of reasoning when he told The Economist that health insurance should cost $15 per month.

Data shows the average single person getting insurance through an employer pays close to $100 per month for coverage out of pocket. People in the individual health insurance market can pay hundreds of dollars more every month.

Trump has been fighting reports that he didn't understand the specifics of the Senate's stalled health care reform plan, which made it hard for him to convince lawmakers to get on board.

Senators reportedly avoided discussing the fine details of the bill with Trump, discussing options with Vice President Mike Pence instead. One GOP senator reportedly felt Trump "did not have a grasp of some basic elements of the Senate plan," according to an aide.

Trump fired back against those reports, tweeting, "Wrong, I know the subject well & want victory for U.S."

The GOP is continuing to try to find a solution for health care reform that will get enough votes to pass. The Senate budget committee released a new draft of the bill Thursday.

The Congressional Budget Office estimates that compared to Obamacare, it would lower the average single person's premiums by 25 percent and leave 22 million more Americans uninsured by 2026.