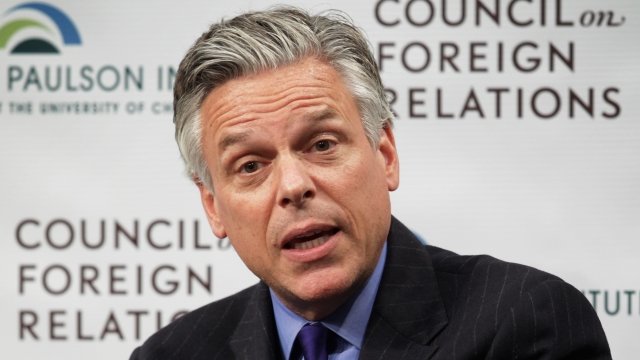 Jon Huntsman is the former governor of Utah. He has also twice served as a U.S. ambassador.

President Donald Trump announced Tuesday he plans to nominate former Utah Gov. Jon Huntsman as the next ambassador to Russia.

There's been speculation that Trump would choose Huntsman for several months. Politico reported in March that Trump had offered the position to Huntsman and Huntsman planned to accept it.

The one-time presidential candidate will need to be confirmed by the Senate.

Robert Wood "Woody" Johnson IV and Jamie McCourt could be our next ambassadors to the United Kingdom and Belgium, respectively.

The position is especially important given the U.S. Intelligence Community's assessment that Russia tried to influence the 2016 presidential election.

In response, the Obama administration issued new sanctions and seized two Russian compounds in the U.S.

Trump and Huntsman have a history.

Huntsman called on Trump to drop out of the presidential race in October 2016 after a lewd 2005 "Access Hollywood" video of Trump leaked.

Trump has previously criticized Huntsman on Twitter and called him a "lightweight."

In 2012, Trump tweeted that he refused to meet with Huntsman because he "gave away our country to China!" The tweet came after Huntsman dropped out of the Republican presidential race.