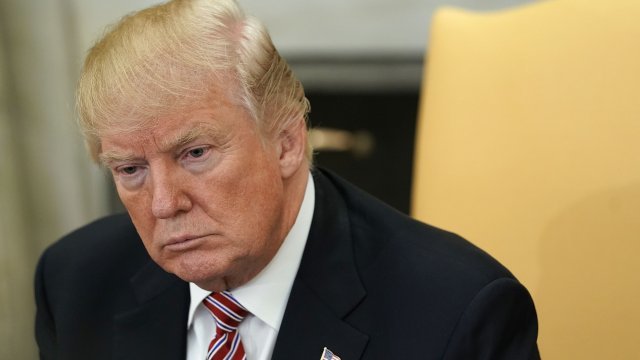 PolitiFact says this is the first time President Trump has denounced domestic violence.

"I'm totally opposed to domestic violence of any kind. Everyone knows that. And it almost wouldn't even have to be said," President Donald Trump said Wednesday.

But the reason that question has been asked, and asked repeatedly, is due to how the White House responded to domestic abuse allegations against two staffers who resigned once the allegations became public.

When the allegations were revealed, the White House tried to defend the two men; most notably, White House chief of staff John Kelly called Rob Porter a man of "true integrity and honor." Trump himself seemed to respond to reports by saying on Twitter: "Peoples lives are being shattered and destroyed by a mere allegation. Some are true and some are false. Some are old and some are new." He also questioned whether due process was still a thing.

If Hillary thinks she can unleash her husband, with his terrible record of women abuse, while playing the women's card on me, she's wrong!

According to PolitiFact, this is the first time Trump has actually denounced domestic abuse publicly. The closest thing was a tweet in 2015, when he used Bill Clinton's history to attack Hillary Clinton.