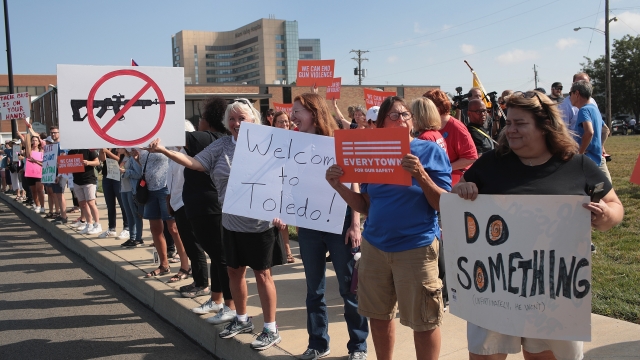 Some residents in both cities worried that President Trump's presence could be too divisive for grieving communities.

On Wednesday, President Donald Trump visited El Paso, Texas, and Dayton, Ohio, after mass shootings in the cities left 31 people dead and dozens injured. But many residents were reluctant to welcome him, concerned that his presence could be too divisive for grieving communities.

Grisham said: "Everybody received him very warmly. Everybody was very, very excited to see him."

But some Dayton and El Paso residents said the president was unwelcome. Many were protesting the president's rhetoric, which they say has provoked racial tensions. And hundreds in Dayton greeted the president with signs and chants calling for action on gun violence.

Some critics even feel President Trump's rhetoric has inspired hate-based violence and ultimately led to the two mass shootings, among other incidents.

On Wednesday, the president denied such allegations, saying he thinks his rhetoric "brings people together" and that "our country is doing incredibly well." He's disputed that he's responsible for the nation's divisions, and he says he's "concerned" about the rise of any hate group and will "do something about it."

He said: "I don't want to put guns into the hands of mentally unstable people or people with rage or hate ... sick people."

The president told reporters that he thinks Congress is getting close to a bill on background checks. But when it comes to potential assault weapon bans, he feels "there is no political appetite from the standpoint of a legislature."