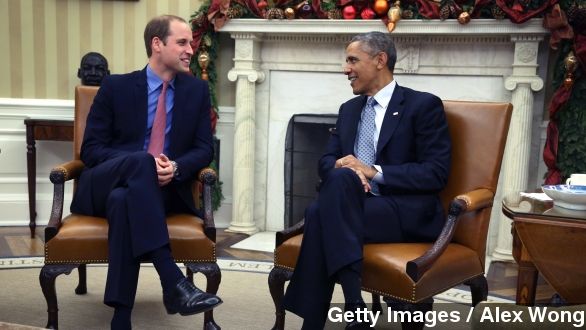 President Obama and Prince William sat down for a brief meeting Monday, and the White House wanted to ensure journalists were on their best behavior.

When the commander-in-chief meets the Duke of Cambridge, there's bound to be plenty of excitement. So just to be on the safe side, the White House made sure to lay down a few guidelines for pool reporters. Chief among them: no selfies.

President Obama met with Prince William during his brief trip to D.C. Monday. William visited the nation's capitol to give a speech at the World Bank about wildlife poaching.

But for the cameras, the two kept their conversation on lighter subjects. William told Obama, "I remember when George was born, I forgot to actually work out whether it was a boy or a girl. The excitement of the event and everything else was just chaos."

And while the Prince did comment on the heavy media presence, saying, "You've got pretty much every member of the press in here. Can't get any more people in the Oval Office."

It seems the White House selfie ban kept the pool photographers focused on taking shots of the two famous people rather than their own faces.

The Obama administration has presided over the rise of the selfie, and thus has a history of grappling with the trend. You might remember this infamous photo the Red Sox' David Ortiz took with the President back in April.

It turned out to be a promotional stunt for Samsung, and afterward the White House briefly considered a blanket ban on all presidential selfies.

When French president Francois Hollande visited Obama last February, the French press corps that came with him also raised a ruckus with their smartphones, taking pictures in the White House Press Room, of the presidential dogs and yes, a selfie with two world leaders in the background.

A Telegraph reporter noted the incident with the French press in particular was behind the decision to ban selfies this time. He also added, "As far as your reporter could tell, the British press were better behaved than their Gallic cousins and no selfies were taken."

Oh, and if you think the White House was being fussy, keep this in mind: Buckingham Palace asked pool reporters to smarten up for the royal visit. Politico obtained the media request, which warns in part, "Those wearing jeans or trainers will not be admitted and casually dressed members of the media will be turned away."

The royal couple are in New York for one more day as part of their three-day tour of the states. Their agenda included taking in Monday night's NBA game between the Cavaliers and the Nets.