Drought, Floods And Bacteria Are Leading To An Olive Oil Shortage 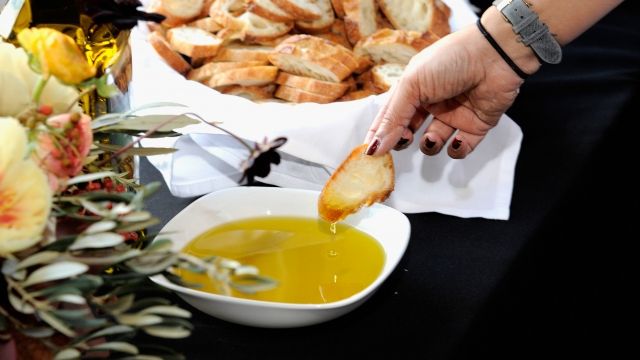 Prices of olive oil are set to rise — and keep rising.

If you cook at home regularly, you might want to listen up: We could be facing a global shortage of olive oil.

The three countries that produce the bulk of olives and olive oil — Spain, Greece and Italy — have been suffering from drought, floods, bugs and bacteria.

Italian growers are dealing with an outbreak of Xylella fastidiosa — the bacteria has affected more than a million olive trees. Spain had a hot, dry summer, which led to the worst olive harvest in 20 years.

Prices have been rising. The shortage comes at a time when olive oil is already in high demand, in part due to a huge new market in China.

From 2006 to 2012, Chinese imports of olive oil increased 30 percent a year. In 2013, China was thought to be the world's largest importer of olive oil. The spike in popularity is attributed to olive oil being healthier than traditional cooking oil.

The shortage hasn't hit U.S. wallets yet, thanks in part to the strength of the American dollar.

Trump: US Dollar 'Too Strong,' GOP Tax Overhaul 'Too Complicated'

Donald Trump says the US dollar is too strong to be competitive. He called a GOP tax plan that would make the dollar even stronger "too complicated."

But in places like the U.K., where the uncertainty of Brexit has caused a massive fluctuation in the value of the pound, the shortage is making a bigger impact. By the end of the year, the price of a bottle of olive oil could increase by up to one third.

British celebrity chef Jamie Oliver has announced he will close six Italian restaurants he owns in Britain due to the volatility of the pound and its impact on food prices.

"Olive oil is expensive and very much in the hands of nature," Oliver said. "The really good stuff is worth every penny. You pretty much charge the oil per tablespoon, like you would foie gras or caviar."