Pricey Passover: Why Matzah Is So Expensive 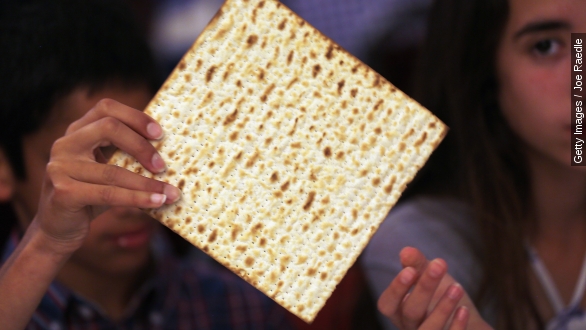 The matzah many prefer for Passover comes with a hefty price tag, as high as $25 to $30 per pound at some online grocery stores.

It's a holiday meant to remember the suffering of the Jewish people, but for many who observe Passover, it doesn't come cheap.

We're talking about the food. Specifically, the matzah.

For those who are unfamiliar, matzah is the unleavened bread eaten during the weeklong holiday of Passover. (Video via YouTube / JewishPressTV)

Over that period, leavened bread — or bread that rises, along with many other foods — gets the boot. (Video via YouTube / MyRecipes.com)

The handmade matzah many prefer — known as shmurah — comes with a hefty price tag, as high as $25 to $30 per pound at some online grocery stores.

On top of the price, many find it isn't particularly tasty, either. A writer for Serious Eats notes most matzahs are "bland and almost flavorless." Gluten-free matzah? He says, "God-awful (pun intended)." (Video via YWN)

Of course, the taste isn't really the point. So why the premium prices?

As a writer for Slate notes, foods considered kosher for Passover require stricter oversight from rabbis than your average kosher food.

(VO_slate)
He uses ketchup as an example: "Not only does the ketchup have to be made under full-time supervision for Passover, but so do the spices, vinegar, and oils that flavor it. And someone's got to pay for the rabbi's time."

On top of that, 5 Towns Jewish Times says many of those involved in making foods for Passover are flown in from Israel, and those airline tickets add up. (Video via Voz Iz Neias News)

Of course, the holiday expenses don't end with matzah. Kosher-for-Passover standards can make other foods, including desserts, cereals and candy a little higher as well. (Video via YouTube / Joy of Kosher)

Though if you follow a kosher diet the rest of the year, you might be used to that.

According to a new report from the Metropolitan Council on Jewish Poverty, kosher foods in general tend to cost roughly 30 percent more than their nonkosher alternatives.

This video includes images from Getty Images and music from The Underscore Orkestra / CC BY NC SA 4.0.