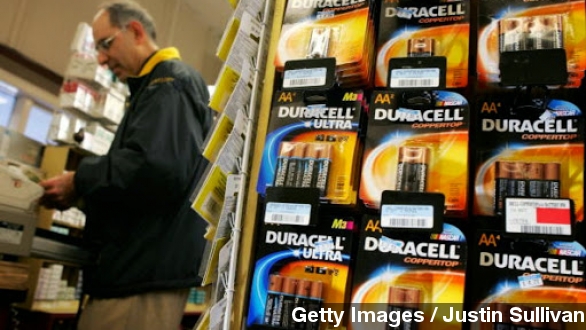 Warren Buffett-owned Berkshire Hathaway is buying Duracell for $4.7 billion worth of stock.

Procter & Gamble is changing out its batteries in exchange for stocks. P&G is now selling Duracell to Warren Buffett-owned Berkshire Hathaway.

But the transaction is, as some outlets have noted, "unusual" and is "aimed at lowering the overall tax bill." It involves a stock swap and is one Buffett has used before to avoid big taxes.

Here's how it breaks down. Before the transaction is complete, P&G will recapitalize Duracell with about $1.7 billion. In exchange, Berkshire Hathaway will give Procter & Gamble all the stock it owns in Procter & Gamble — about $4.7 billion worth. So, all in all, it's about a $3 billion buy for Berkshire.

The acquisition is right up Warren Buffett's alley too.

"Yeah. It's a business he could get his head around and understand. We're talking about Warren Buffett, obviously."

While it's the one of the few "household products" company Buffett and Berkshire Hathaway owns, it joins the likes of other consumer-based products like Dairy Queen, Heinz and Geico.

P&G has been looking for ways to separate itself from the durable cell-battery maker. Just last month, P&G officials announced it would split Duracell from the rest of its holdings, making it into a standalone company.

That news worked well for Cincinnati-based P&G. Stock soared to $85.97 a share the Friday of the news — an all-time high.

It's been trading around the $89 mark since Nov. 4. The transaction is expected to be officially finalized the second half of next year.

This video includes images from Mike Mozart / CC BY 2.0.