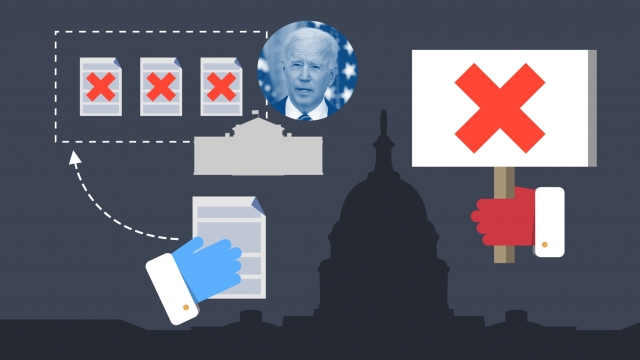 Progressives are already worried President Biden's concessions to moderates and conservative lawmakers could cost Democrats seats in Congress in 2022.

The 2020 election remains fresh in the minds of many Democrats, but progressive organizers are already jumping full-on into prepping for 2022.

"What will it take to be successful for Democrats in 2022?" asked Adam Green, co-founder of the Progressive Change Campaign Committee (PCCC).

Organizers at leading progressive groups, like the PCCC, Our Revolution, RootsAction.org and No Excuses PAC, tell Newsy that if Democrats want to win big in 2022, they'll need to push forward a bold agenda — and fast.

"If Biden does not deliver big for working people, the right-wing will come storming back in November of 2022," warned Jeff Cohen, co-founder of RootsAct.org. The grassroots group is pushing for the Biden administration to adopt more progressive positions through its "No Honeymoon for the Biden Presidency" campaign.

Already, progressives worry the president's concessions to moderates and conservatives in Congress — on student loan forgiveness, a $15 minimum wage and income limits for stimulus checks — could haunt Democrats in the midterms.

"If people aren't seeing real relief coming through a Democratic Congress and a Democratic administration, the risk is real," explained Paco Fabian, campaigns and communications director of Our Revolution, the Bernie Sanders-affiliated progressive group. "There's going to be some pain coming because folks aren't seeing the benefit of voting for Democrats."

In recent years, the left's political power has grown as it's gotten better at organizing and fundraising. It's also more willing to criticize — and challenge — the Democratic establishment than before.

"There's no doubt that Democrats in Congress are on notice that we are ready to primary you," Cohen said. He added that RootsAction.org plans to publish a report detailing which Democrats should be challenged from the left in 2022.

Other progressive groups, like No Excuses PAC, have already started targeting incumbent Democrats with pressure campaigns and ads across radio, TV and newspapers.

"As soon as [Sen. Joe Manchin, D-W.V.] came out, taken a position against the COVID relief bill, we were running ads across the state of West Virginia on the radio and newspapers calling that out as a bad idea and just letting people know that he did it," said Corbin Trent, co-founder of the progressive No Excuses PAC, whose leaders helped elect Rep. Alexandria Ocasio Cortez, Democrat of N.Y., in 2018.

"Same thing with Kyrsten Sinema," Trent added, referring to Democratic Sen. Kyrsten Sinema of Arizona. "When she's done several things over the course of this administration, where she's taken what we considered to be bad positions, we've again run radio ads there and she, like Machin, has softened."

At the same time, many progressives admit the administration's concessions are relatively minor compared with the victories they secured in the COVID relief package, like stimulus checks, monthly child tax credits and expanded access to health care.

They also feel optimistic about the administration's plans to tackle climate change and modernize the nation's infrastructure.

"The Biden administration is taking us in a very positive direction. The way they're signaling at least on the infrastructure bill is important," Trent said.

More moderate Democrats, meanwhile, worry that embracing the left will make it harder for the party to fend off challenges from Republicans, especially in swing districts.

Historically, midterms have been seen as a referendum on the party in control of the White House. And in almost every election since World War II, the party of the sitting president has lost seats in the House and Senate.

That matters because Democratic control of Congress currently hangs by a thread — a loss of just five House seats and one Senate seat would give Republicans majorities.

Aware of the dynamics that exist for the president's party, and eager to avoid repeating history, organizers on the left say an early and "sustained drip" of delivering to voters is key to making gains in 2022.

"Taking action early will set the tone on what folks can expect by voting for Democrats," expained Fabian, Our Revolution's campaigns and communication director. "If there's no action, that sets the tone as well."