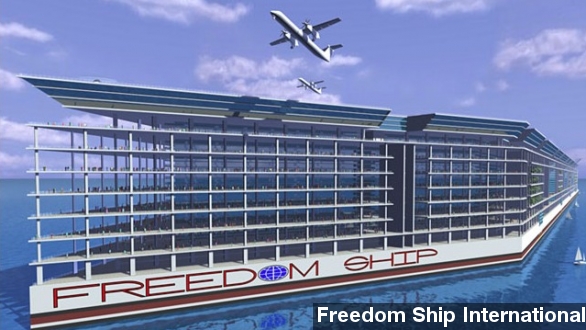 It might be the next logical step from taking a trip on a cruise liner — Freedom Ship would be a floating city for the super-rich. At least, if it ever gets built.

Renewed plans for the massive floating platform were revealed last week. Its creators say it would hold 100,000 people, half of them residents, plus a mall, schools, cinemas, etc. (Via Freedom Ship International)

The ship would circumnavigate the globe every two years, docking at cities about 70 percent of the time and on the move the other 30.

At almost 1 mile long, it would be four times larger than the current biggest ship and would make the Titanic look like a rowboat.

And for its residents, Freedom Ship would boast one distinct advantage.

"It's unclear how taxes would work for people there, but they said it will not be registered in the United States, so Uncle Sam would not be able to reach you on that boat." (Via CNBC)

That obviously raises some questions. Would it essentially be a tax haven? And how would maritime law operate on a city-wide scale? But perhaps the bigger question: Is this legit?

The idea originated in the 1990s with a man named Norman Nixon, but it was abandoned when the 2008 financial crisis hit. After Nixon died last year, his former business partners resurrected the concept. (Via Discovery)

Freedom Ship's creators couldn't gather the necessary capital the first time around. After all, that's a tall task when asking for $9 to $10 billion — with a "B." But one of the men pushing the idea, Richard Gooch, tells Al Jazeera it is possible.

GOOCH: "We have to wait and see if the dollars are there, if the VC, the venture capital money, could come in. We do believe that we have enough people interested to fill at least one ship, wanting to live on it or vacation on it or work on it."

Gooch says azipods — the electric motors that power cruise ships — would be used to propel Freedom Ship and that they'd need roughly 100 of them.