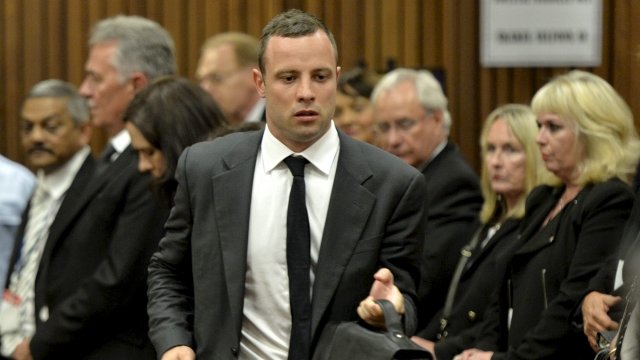 They argued the six-year prison sentence Pistorius was given in 2016 for killing his girlfriend was "shockingly lenient."

Last year, a judge sentenced Pistorius to six years in prison for murdering his girlfriend Reeva Steenkamp in February 2013.

Pistorius shot her while she was in a bathroom. At the trial, Pistorius said he thought Steenkamp was an intruder.

The judge decided to give Pistorius a lesser sentence in 2016 because of mitigating factors like remorse and rehabilitation.

In the Supreme Court of Appeal on Friday, a prosecutor argued that sentence was "shockingly lenient." The state argued Pistorius' sentence should be extended to 15 years, which is the minimum sentence for murder in South Africa.

A military judge at Fort Bragg in North Carolina handed down the ruling Friday.

This is the second time prosecutors have appealed in the Pistorius case.

The same judge who sentenced Pistorius to six years originally found the athlete guilty of culpable homicide. In 2015, the appeals court upped that verdict to murder.

The judges who heard Friday's appeal reserved judgment for a later date.