The Prosecutor's Role In Doing And Undoing Mass Incarceration 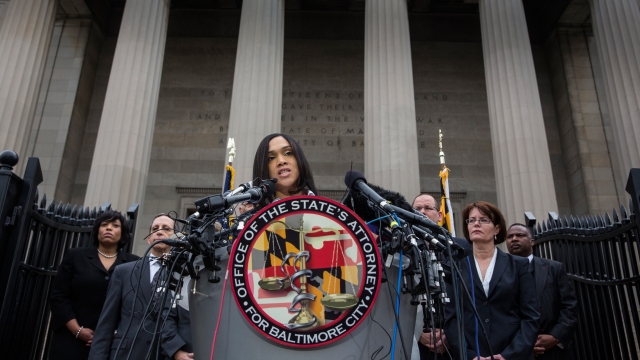 Lately, in cities and states across the country, tough-on-crime attorneys are being replaced by prosecutors campaigning on decarceration.

Several factors are behind America's incarceration boom over the last 40 years -- including the War on Drugs and lengthy mandatory minimum sentences. But one that's overlooked is the role prosecutors played — and can still play — in turning things around.

PFAFF: "So you get arrested, what's the chance the D.A. says, 'I'm going to charge you with this felony'? It's almost doubled."

In the 1990s, even though the crime rate was consistently falling, two trend lines continued to increase right alongside each other — the number of prosecutors being hired and the number of people being incarcerated.

Pfaff's book, "Locked In" says this hiring trend explains how the United States doubled its prison population at a time when there was consistently less crime and fewer criminals.

Lately, in cities and states across the country, tough-on-crime attorneys are being replaced by prosecutors campaigning on decarceration.

Miriam Krinsky worked as a prosecutor for 15 years during the incarceration boom. She now leads Fair and Just Prosecution, an organization of newly-elected progressive prosecutors.

KRINSKY: "They are essentially the gatekeepers. … What kind of charges get filed are in the hands of prosecutors and because of the fact that the vast majority 90 percent plus of cases are resolved by plea bargains they never get in the hands of a jury of somebody's peers. So when you package all of that together what you have is a tremendous amount of discretion and authority on the part of prosecutors to drive either de-incarceration or over incarceration."

In the same way prosecutors have driven the prison population up, Krinsky believes they can and will drive it down. But it's going to take reform-minded policies at the local level.

For example: In Philadelphia, a combination of post and pre-trial reforms like ending the bail requirement for low-level crimes have cut the jail population by more than 40%. Since 2015, the number of inmates dropped from 8,000 to 4,700.

In Chicago, Kim Foxx expunged more than 1,000 marijuana convictions and diverted nearly 5,000 low-level cases away from prosecution to alternative treatment..

KRINSKY: "This incredible moment developed in 2016. There started to become a growing number of individuals elected around the country who ran on an agenda of wanting to blow up the boxes and bring a completely different vision to the field of prosecution. They were talking about shrinking the system."