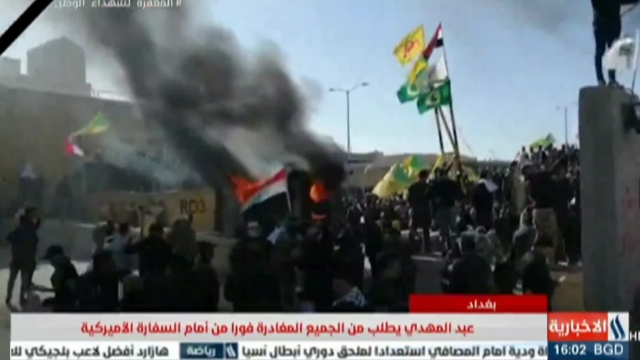 Demonstrators breached the compound's perimeter as tensions are high following American airstrikes that killed members of an Iranian-backed militia.

Defense Secretary Mark Esper has announced the U.S. will send additional forces to its embassy in Baghdad after it was attacked Tuesday by hundreds of violent protesters.

According to The Associated Press, a reception area was set ablaze and U.S. guards deployed tear gas into the crowds as clouds of smoke billowed from the grounds.

The protests are in response to the five deadly U.S. airstrikes on Sunday that killed 25 and wounded dozens of the Iranian-backed militia operating in Iraq.

Secretary of State Mike Pompeo had this to say about the strikes: "What we did was take a decisive response that makes clear what President Trump has said for months and months and months, which is that we will not stand for the Islamic Republic of Iran to take actions that put American men and women in jeopardy."

President Trump responded on Twitter, saying the strikes were in retaliation for the death of an American last week: "Iran killed an American contractor, wounding many. We strongly responded, and always will. Now Iran is orchestrating an attack on the U.S. Embassy in Iraq. They will be held fully responsible. In addition, we expect Iraq to use its forces to protect the Embassy, and so notified!”

Multiple reports say the mob, consisting mostly of militiamen, hurled stones and water at the embassy while chanting "Death to America" and "Down, Down, USA!" Three trailers were also set on fire.

Armed soldiers lined the roof of the embassy and armored vehicles with Iraqi soldiers eventually arrived in attempt to disperse the crowds.And the situation could keep escalating: The U.S. has now deployed Apache helicopters to monitor the area and announced Marine reinforcements will be sent in to secure the embassy.

Since May, the State Department has maintained a level 4 "Do Not Travel" advisory for Iraq, asking Americans to avoid the area due to a high risk of violence and kidnapping.