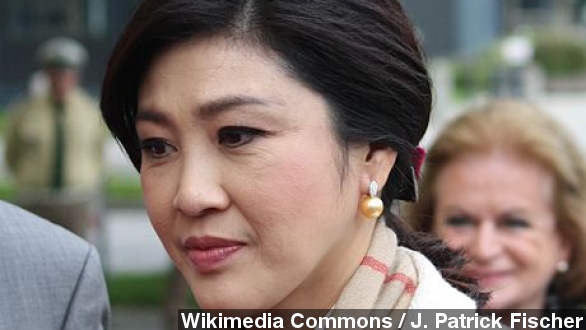 In their boldest move yet, anti-government protesters took their weeklong unrest to a new level by breaking into the Thai army's compound in Bangkok.

The latest and boldest move by anti-government protesters in Thailand came up against the very people they may have to face if the unrest ever turns violent — the Thai Army.

"The demonstrators — the anti-government protesters — forced their way into through the gate behind me, went into the compound of the Royal Thai Army and held a rally inside." (Via BBC)

The two-hour demonstration inside the army's compound in Bangkok Friday marked nearly a week since protesters began calling for the removal of Thailand's prime minister, Yingluck Shinawatra. (Via The Wall Street Journal)

While this was certainly a dramatic step, a BBC reporter on scene described the look on army officers' faces as bemused. Shinawatra has ordered the protests not be met with violence.

"She says that no force will be taken against these demonstrators, but these people say they're not going anywhere. They will stay here for as long as it takes." (Via CNN)

"It was all fairly civilized, but the protesters want to know which way the Army will go should things deteriorate. Which side they will choose." (Via Sky News)

Shinawatra is the younger sister of exiled former Thai Prime Minister Thaksin Shinawatra, who was ousted by a military coup in 2006 amid a corruption scandal. (Via Royal Thai Government)

The protesters accuse Yingluck of being her brother's puppet, and the demostrations began after a recent bill in the country's parliament to grant the former prime minister amnesty.

She also survived a no confidence vote Thursday that was mostly symbolic because of her political party's overwhelming majority holding elected seats in government.

So far, tens of thousands of protesters have occupied several government buildings since Sunday and even cut power to Bangkok's police headquarters. (Via WTRF)