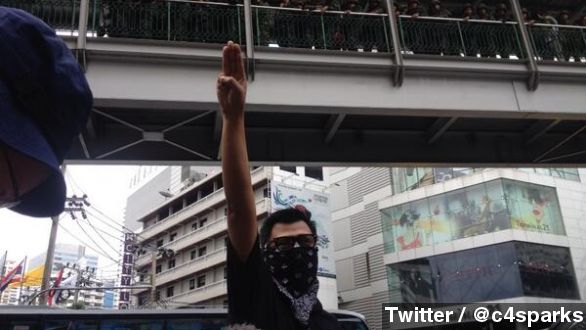 The anti-coup protesters have compared Thailand's military to the tyrannical fictional government in "The Hunger Games."

​You could call it a case of life imitating art.

Protesters in Thailand have taken to the streets with this three-fingered salute. Look familiar?  (Via Euronews)

If you're not familiar with it, in the film and book series, the salute is used by oppressed citizens as a symbol of resistance against a tyrannical government. (Via Lionsgate / "The Hunger Games: Mockingjay")

As for what this could possibly have to do with Thailand? First, a quick refresher.

After months of anti-government protests against Thailand's prime minister, the military recently stepped in — declaring a coup and placing the country under martial law. (Via BBC)

The streets emptied of anti-government protesters, and in their place are now pro-democracy protesters. They say the military takeover is a crime and have chosen the three-finger gesture as their symbol of defiance and solidarity. (Via Voice of America)

One protester tweeted: "Dear #HungerGames. We've taken your sign as our own. Our struggle is non-fiction. Thanks."

Quartz writes the protesters' use of the "Hunger Games" symbol actually makes a lot of sense.

"Thais are avid consumers of pop culture, including the 'Hunger Games' movies, so it's not surprising that they have chosen to use the salute favored by cinematic heroine Katniss Everdeen."

Although the protesters say the gesture is simply a form of peaceful resistance, Thailand's military sees it differently.

Responding in a way oddly similar to the authorities in "The Hunger Games," the military has warned anyone seen using the signal could face arrest. (Via The Washington Post)

Sure enough, the Bangkok Post released this video showing one woman who'd flashed the sign getting shoved into a taxi, reportedly by plainclothes police officers.

It's also worth noting some protesters have told reporters the three fingers stand for "liberty, brotherhood and equality" — the slogan of the French Revolution. But no matter the origin, we're pretty sure Katniss Everdeen would approve.