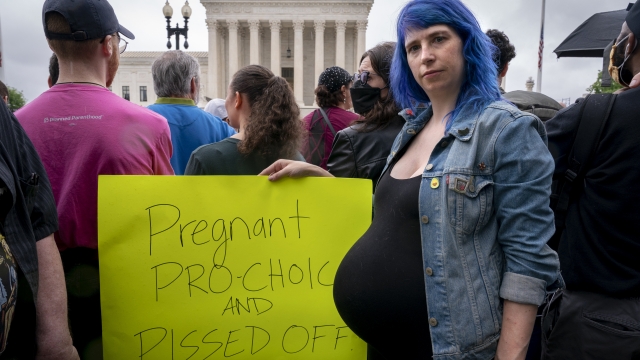 Two people were arrested and accused of throwing paint over a fence near the Supreme Court, according to the Capitol Police Department.

For a second day, people gathered outside the Supreme Court for peaceful demonstrations.

An estimate of about several hundred in Washington D.C., overwhelmingly upset with the court's decision; they tell us not just about the impact on health care but also what they feel are politics on the court.

At the same time, though, less visible outside the court, are people who welcome this decision.

In front of the Supreme Court, a demand for legal abortion in the wake of the court's decision finding no constitutional right for it.

"Hearing everything about  this decision definitely gave me a lot of anxiety. So, I wanted to be part of making the noise that we need to," said demonstrator Rose Bedell.

"I'm more so angry for  the future, is not even just us anymore," said demonstrator Hannah Lee.

Demonstrators focused on the impact on women's health care, and future implications beyond abortion.

"We now have sisters in Texas, Louisiana, Missouri, West Virginia that are not going to have the protections in place," said demonstrator Leslie Mangol.

"It's ridiculous that we're here having to do this. And as an attorney, I'm just appalled to watch the courts used politics," said demonstrator Jennifer McAllister.

The court found no constitutional right for abortion, overturned decades of precedent with Roe and Casey, sending regulation into state hands.

Leaving some looking towards the federal government

"My administration will focus on how they administer it and whether or not they violate other laws, like deciding to not allow people to cross state lines to get public health services. And we're going to take actions to protect women's rights and reproductive health," said President Joe Biden.

But as some speak out against the ruling in cities across the country, others celebrate a post-Roe era against abortions, looking at their next steps in the wake of the decision.

"Abortion is the greatest human rights injustice that this generation has had to live through and finally these wrongs are being made right," said Michele Hendrickson of Students for Life of America.

"I really am feeling the weight of all this because this is not any type of end for the pro-life movement. "This is just the beginning. We have to make sure that we're going out there and continuing to expand resources that we already have in place so that these families can live in safe and sustainable communities and not have to worry about, you know, whether they're going to pay rent or their child's gonna live," said an anti-abortion rights demonstrator.