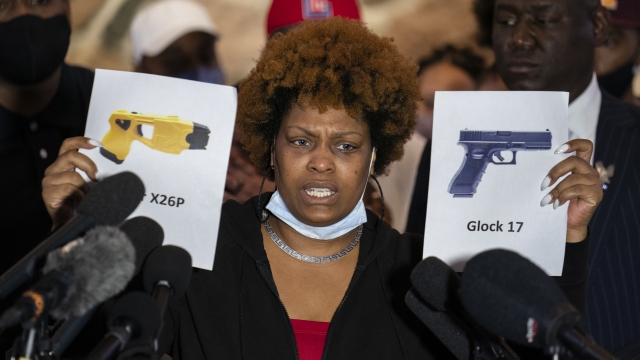 ​Wright's family and demonstrators say he was killed because he's Black.

We saw a fifth night of protests in Brooklyn Center, Minnesota after the shooting death of 20-year-old Daunte Wright.

The now-former police chief said Potter told him she meant to use her Taser and accidentally used her gun.

That's something Wright's family and demonstrators don't believe. They say Wright was killed because he's Black.

The situation in Brooklyn Center has been tense since that night. Protesters rattled the fence that was put up outside the police department.

On the other side of that fence, law enforcement allowed reporters to get behind the barricade.

Officials were heavily armed and we've seen them use tear gas and flash bangs to disperse crowds throughout the week.

During the day that fence has become a symbol of activism, with dozens of air fresheners hanging, representing what Wright's mom says is the reason he was pulled over.

She says that's what her son told her the last time they spoke.

Minnesota is one of many states that doesn't allow drivers to hang objects from their rearview mirror.

That's long been a point of contention. Civil rights advocates say it gives officers another reason to target Black drivers.