Protests Over Kenosha Shooting Continue Amid Calls For Answers 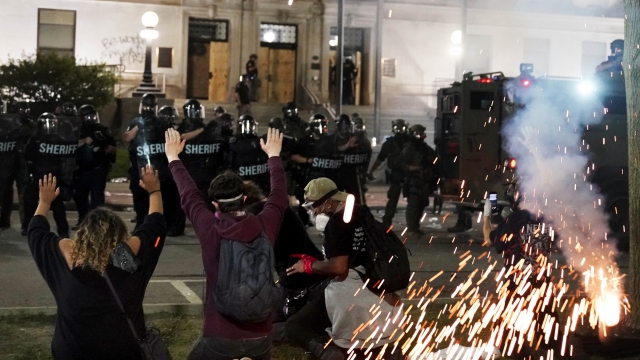 Jacob Blake's family calls for non-violent protests and answers as the investigation continues into Sunday's shooting by a Kenosha police officer.

It was another chaotic night in Kenosha, Wisconsin where a 29-year-old Black man was shot several times in the back by a White police officer.

While tensions were high, it was a mostly peaceful protest throughout the day on Monday, with speakers urging protesters remain peaceful overnight and vote.

But by nightfall, things changed. For the second night in a row, community members took to the streets, violating an 8 p.m. to 7 a.m. curfew and burning several government buildings and businesses.

More than 100 National Guard officers were deployed in Kenosha, and police used tear gas to disperse some demonstrators. But fires were set anyway with people looting and rioting until early Tuesday morning. The Kenosha News reported  at least 30 businesses were destroyed as well as a number of homes.

"As I was riding through here, I noticed a lot of damage. It doesn't reflect my son or my family," Jacob Blake's Mother, Julia Jackson, said.

Jacob Blake has been recovering in a Milwaukee hospital. According to his father, the shooting has left Blake paralyzed from the waist down. Doctors don't know yet if his injuries are permanent.

"The shot my son … they shot my son 7 times, like he didn't matter. But my son matters! He’s a human being, and he matters," Jacob Blake's Father, Jacob Blake Sr. said.

"Let's see if our advocacy is making a change because we don't need anymore examples, heaven is full to its capacity. ... And that's probably why Jacob is still with us today," Jacob Blake's Family Attorney, B'Ivory LaMarr, said.

This shooting in a city of 100,000 people about midway between Chicago and Milwaukee has captured the attention of the country with everyone from politicians to star athletes weighing in.

Both Joe Biden and Kamala Harris condemned the shooting and the officer's actions. The Democratic nominee said in a statement: "This morning, the nation wakes up yet again with grief and outrage that yet another Black American is a victim of excessive force."

NBA champion LeBron James weighed in after a playoff win. ESPN tweeted out his message, along with responses from other players.

"We are scared as Black people in America. Black men, Black women, Black kids, we are terrified. That's what it feels like. It just hurts."

Several Republican lawmakers and the local police union have scolded Biden, Wisconsin's governor and other onlookers for jumping to judgment without knowing exactly what happened before and after the shooting.

The Kenosha Professional Police Association President said in a statement, "We ask that you withhold from passing judgment until all the facts are known and released."

For now, the investigation into the shooting continues, leaving the Blake family, the Kenosha community and the nation awaiting answers.