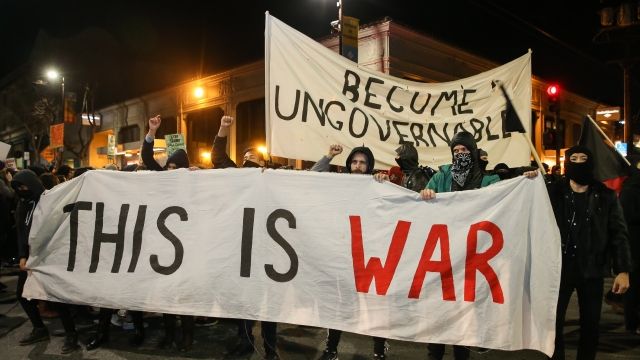 Milo Yiannopoulos was scheduled to speak at the University of California, Berkeley. But violent protests forced the university to cancel the event.

Yiannopoulos is probably most well-known for his outspoken comments, which have been widely criticized as racist, misogynist, anti-Muslim and white supremacist.

"Feminism is cancer, thank you very much," Yiannopoulos said at the University of Massachusetts last year.

Hours before Yiannopoulos was supposed to give a speech at Berkeley's student union, more than 1,500 people had gathered in the streets to protest the event.

The Money For Milo Yiannopoulos' Charity Is In His Personal Account

The Breitbart editor is accused of keeping his Yiannopoulos Privilege Grant money to himself, according to The Daily Beast.

According to the university, "150 masked agitators" were responsible for interrupting an otherwise nonviolent protest. Administrators decided to cancel Yiannopoulos' speech about two hours before the event.

"UC Berkeley, of course, being the home of the free speech movement. It's ironic and sad that this campus appears to be nowhere, no friends to free speech anymore," Yiannopoulos said.

President Donald Trump weighed in on the protests, suggesting that federal funds could be pulled from the state university. It's unclear how many of the protesters were Berkeley students, but in a statement, the university said the group of "agitators" came onto campus and interrupted a lawful protest. School officials condemned "in the strongest possible terms the violence and unlawful behavior."

This is far from the first time a Yiannopoulos speaking engagement has been canceled. Just last month, his scheduled talk at the University of California, Davis was also shut down in response to protests.