Pundits Sound Off On Obama-Castro Handshake 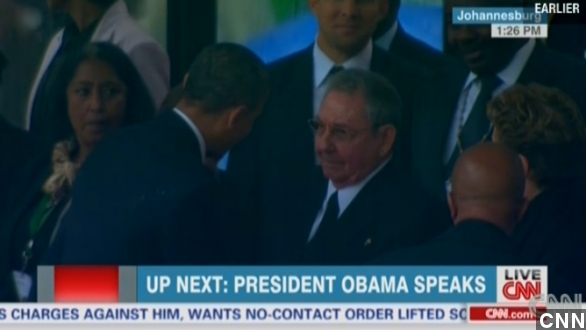 When Obama shook the Cuban president's hand at Nelson Mandela's memorial service, he set the media chattering over the possible implications.

Nelson Mandela's memorial service Tuesday marked one of the biggest gatherings of world leaders in recent history. And that means plenty of opportunities for awkward handshakes.

Like this handshake between President Obama and Cuban President Raul Castro, the younger brother of Fidel Castro. (Via Politico)

It was an impromptu meeting, according to The White House, but the symbolism of an American president shaking hands with a Cuban leader kept politicians and pundits sounding off throughout the day. (Via Politico)

"When the leader of the free world shakes the bloody hand of a ruthless dictator like Raul Castro, it becomes a propaganda coup for the tyrant." (Via C-SPAN)

Others, like a Council on Foreign Relations fellow and a Forbes contributor saw it as a hopeful sign of thawing relations between the two countries.

"I was ... fundamentally pleased because I'm a former diplomat, therefore I believe in more engagement, not less." (Via Al Jazeera)

"Hopefully what it means is that this is also Raul Castro's way of saying he's ready to do what his brother never was able to do, which is rejoin with the rest of the world." (Via Fox Business)

But then, contrast that with Obama's comments in honor of Mandela, which others saw as a jab at Castro and other world leaders.

"There are too many leaders who claim solidarity with Madiba's struggle for freedom, but do not tolerate dissent from their own people." (Via Fusion)

So what are we to make of the handshake? Well, a Princeton public affairs professor and Fox News's Greta Van Susteren think what it really meant was just bad planning to get the president in that situation to begin with.

"The president really didn't have a choice. And if he didn't shake his hand, I think it is correct that that, too, would have caused all kinds of fury and firestorms." (Via CNN)

"Shaking hands or not shaking hands was an absolutely no-win situation for our president." (Via Fox News)

And as ABC was quick to point out, often presidential handshakes mean nothing at all.