Putin Delays Vote To Extend His Tenure Due To Coronavirus Pandemic 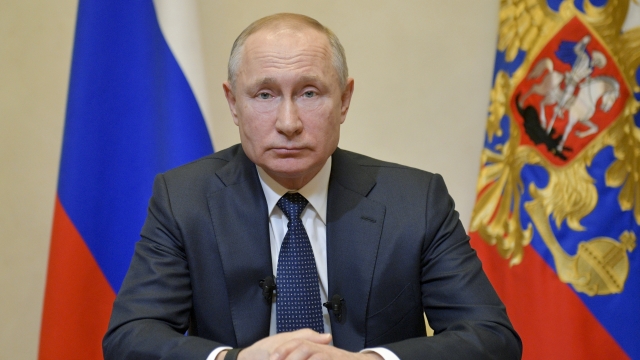 ​In a televised address, Russian President Vladimir Putin said he'd push back a vote on amendments that could let him stay in power until 2036.

Russian President Vladimir Putin has delayed a public vote on constitutional amendments that would allow him to stay in power until 2036.

During a televised address to the nation on Wednesday, Putin said the vote, which was originally scheduled for April 22, would be pushed back due to the coronavirus pandemic. Under current law, presidents in Russia can only serve two six-year terms in a row, and Putin's second consecutive term is set to end in 2024. But a new measure, which Russia's parliament approved earlier this month, would let Putin run for reelection despite that limit.

Putin said the government will see how the pandemic plays out in Russia before it sets a new date for the vote. He also declared next week will be an "official non-work period" for people in nonessential sectors. He warned residents to not take chances and to stay home, saying: "We must protect ourselves, our families and friends, and we must adopt a more disciplined and responsible approach. Do not think ... that this cannot happen to you. It can happen to anyone."