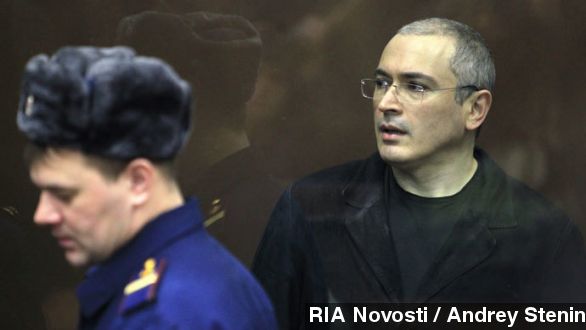 In his latest act of judicial mercy, Russian President Vladimir Putin told reporters he will pardon former billionaire and staunch political rival Mikhail Khodorkovsky, who is currently serving the last months of a 10-year sentence.

During his annual press conference, Putin fielded four hours of questions about everything from NSA surveillance to Ukrainian unrest. But the Russian leader saved his biggest surprise for after the conference. (Via Al Jazeera)

"Khodorkovsky recently wrote a petition asking me to pardon him. He spent more than 10 years in prison. This is a serious punishment. ... In the near future, I will sign a decree to pardon him." (Via RT)

A former wealthy oil CEO, Khodorkovsky was arrested in 2003 for various economic crimes. His decade-long sentence is widely seen as a reprisal for opposing Putin, and human rights groups consider him a political prisoner. (Via BBC)

Without the pardon, Khodorkovsky is due for release in August, but Russian media previously reported fresh charges against the former billionaire could keep him in jail until 2018. That case seems unlikely to go to court now.

Khodorkovsky is the latest in a string of high-profile political pardons in Russia. Earlier this week, the Russian Parliament passed a broad amnesty bill freeing 20,000 prisoners, among them members of Pussy Riot. (Via Euronews)

The amnesty also extended to dozens of Greenpeace protesters arrested in September for trying to board a Russian offshore drilling rig. (Via The Telegraph)

Various groups have been campaigning for the release of these prisoners for a long time, so why the sudden show of clemency from the Kremlin?

The Washington Post says Putin is trying to clean up his human rights record ahead of the upcoming Winter Olympic Games in the Russian city Sochi. "By making this high-profile concession to Western human-rights demands, Putin may well be hoping to undercut the planned diplomatic and commercial boycotts of Sochi.​"

But a writer for Time says Putin's string of releases indicate something more significant: The Russian president feels like his political opponents are no longer a threat.

"All of Russia's billionaires have either pledged their loyalty to Putin or fled the country. All of Russia's independent political parties have been marginalized or disbanded. Finally, this year, the West proved unable or unwilling to challenge Putin in the diplomatic arena. ... He can afford to show a bit of mercy."

The Winter Games are set to begin in February.