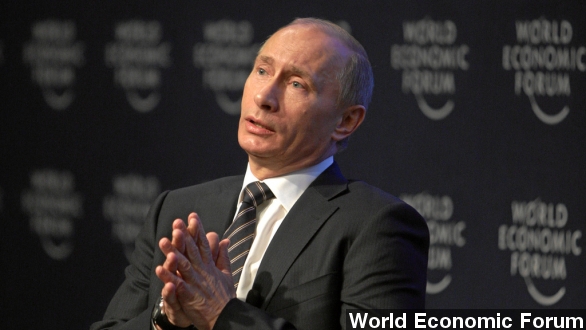 In a move to tighten control over Russian media, Vladimir Putin announced he was dissolving the country’s main news agency, and replacing it with what critics have dubbed the "Ministry of Truth."

The BBC’s Daniel Sandford notes, “of all the state-owned media organisations RIA Novosti has made the greatest attempt to produce balanced coverage in recent years.”

But RIA Novosti will be absorbed into state-funded RT — it's an English-language TV channel known for its pro-Kremlin bias.

As a writer at The New York Times puts it, RT has a "jaundiced view of the failings of the United States and other Western countries."

The new network will be headed by Dmitry Kiselev — a Russian TV host, known for his extremely conservative, and at times controversial, views. (Via Russia 24)

He made headlines this summer when he said gay people should be banned from giving blood, and if they die in a traffic accident, their hearts should be burned instead of used for transplants. (Via The Huffington Post)

He later told reporters he wasn't homophobic and his words were taken out of context. (Via RT)

In any case, Russian officials say the reorganization was designed to improve efficiency and reduce costs.

But in its own report RIA Novosti called the move "the latest in a series of shifts in Russia's news landscape, which appear to point toward a tightening of state control in the already heavily regulated media sector."

Bloggers in Russia have called Kiselev a Kremlin mouthpiece, and dubbed the new agency the “Ministry of Truth” — a reference, of course, to "1984" — George Orwell’s famous novel about a totalitarian state.