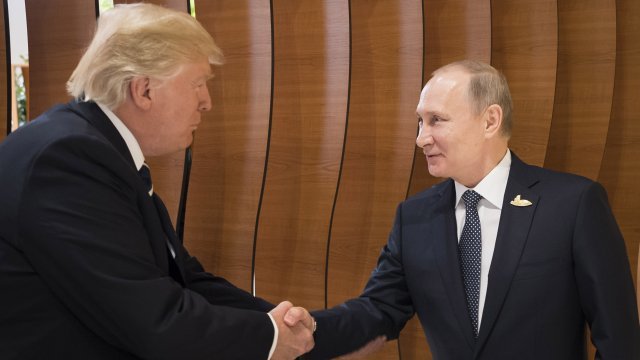 Vladimir Putin is reportedly already making arrangements for a meeting with Donald Trump in Austria.

Russian President Vladimir Putin says he's ready to meet with President Donald Trump whenever the U.S. is ready. The two would discuss the countries' nuclear efforts.

Putin made the announcement Sunday, the same day Trump arrived in Singapore ahead of a summit with North Korean leader Kim Jong-un.

On Saturday, a Kremlin spokesperson suggested Vienna as a potential meeting location.

The timing of the comments may not be arbitrary — they come just days after Trump advocated for Russia, saying it should be allowed to rejoin the G7 summit.

Russia was kicked out in 2014 after annexing Crimea.

Putin and Trump have discussed the idea of a one-on-one meeting over the course of several recent phone calls, and Putin reportedly asked Austria's chancellor to set one up this summer.

The Wall Street Journal reported June 1 that the White House was planning a meeting with Putin to discuss nuclear arms, Syria and Ukraine, but that those talks were in very early stages. The potential meeting would be the third between the two.