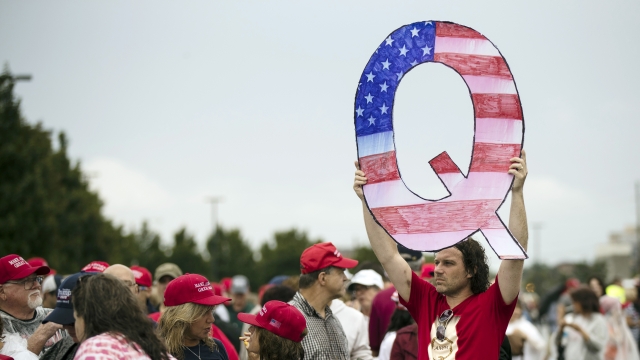 The far-right conspiracy movement is gaining as politicians help spread its message and as the public looks for answers.

Things are already complicated and confusing during this pandemic. But throw in the influence of conspiracy theories, and it gets a whole lot messier.

"Our democracy cannot really function the way it is supposed to in a world in which conspiracy theories are on equal footing in the marketplace of ideas with your credible information and reporting," Worland said.

One of the more popular conspiracy theory groups is QAnon. You've probably heard QAnon mentioned before. Essentially born out of the 2017 "Pizzagate" incident, the movement is based around the theory that President Donald Trump is bringing about a "great awakening" and will expose prominent political figures — the Deep State — for child abuse and political cover-ups.

"It's been referred to as a movement kind of on par with the birth of a religion where Q is the leader of that religion or that cult," Worland said.

Darragh Worland with the News Literacy Project, a Newsy partner, points out how politicians give the movement a signal boost.

Worland says QAnon's ability to absorb any theory into an overarching one by connecting dots that don't actually connect makes it an incubator for conspiracy theories. Those theories provide scapegoats and explanations for what's happening in an unsettled world, especially one mired in a global pandemic where there aren't always answers to what's going on.

"It also offers like a sense of control in a situation where there is really no sense of control, where we feel like there are powers greater than ourselves that are at play that are controlling outcomes," Worland said.

Viruses are eventually contained, sometimes eradicated. Conspiracies and movements fade. But Worland says this conspiracy movement will likely hang about unless society as a whole makes an effort to fact check the information we consume and resist spreading information that hasn't been verified.