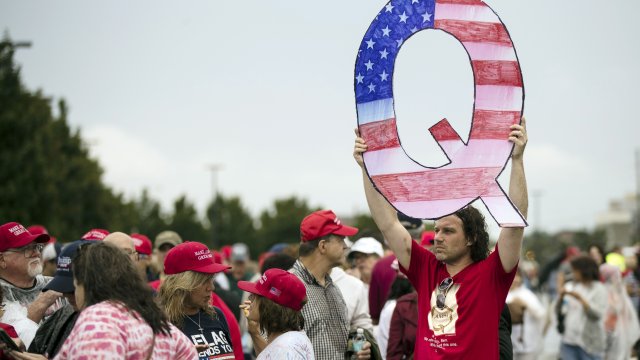 Watchdog group Media Matters for America says at least 48 candidates running for Congress "have previously endorsed or given credence" to QAnon.

On one popular QAnon forum, there's been an ad up for months urging readers to run for political seats, reading "Take responsibility for your school committees or boards… Run for local, state and/or federal office."

The call to action has been met. According to watchdog group Media Matters for America, there are at least 48 candidates running for Congress in 2022 "who have previously endorsed or given credence at some level to the conspiracy theory or promoted QAnon content."

Of those 48 candidates, 44 are registered as Republicans, and 4 are Independents. One candidate running in Arizona, Ron Watkins, served as administrator for the image board where Q did their posting while they were still active.

Extremism experts told Newsy that QAnon's jump into the political sphere signals an important evolution for the conspiracy theory. Their once-fringe ideas, like the false claim that the election was stolen from Trump, are now being absorbed and championed by the Republican party.

According to a Citizen Data poll, while only 11 percent of conservatives said they had a favorable view of QAnon, more than 60 percent said they believed in at least one core belief of QAnon.

"You have to pay lip service to be the worst of these conspiracy theories, because if not, they're gonna turn against you," said Mike Rothschild, author of The Storm Is Upon Us: How QAnon Became A Movement, Cult, And Conspiracy Theory Of Everything. "We've seen it happen many, many times just in the last year with Republicans who dared to step out of line of Trump's greatness, or Biden actually being the president, or 'Hey, maybe we should wear masks.' They get swarmed with people looking to start primary challenges against them."

"GOP candidates will at least have to acknowledge where they converge with or differentiate themselves from things associated with QAnon," said Jack Bratich, Rutgers University professor and QAnon expert. "How many of them think the capital insurrection was either overblown or a leftist psyop?"

Rothschild told Newsy that while many of these QAnon-adjacent candidates will have difficulty winning congressional seats, there's a bigger concern about the power they may have in mayoral or city council races.

"These are races where you don't get a lot of people voting, and if you get some name recognition and get some viral media off a rant that you delivered at a city council meeting, and then you run for city council based on that, you've got a better chance of winning," Rothschild said.

All in all, Rothschild told Newsy that if QAnon believing politicians end up on our school boards or local governments, it could ultimately normalize the main talking points of QAnon and cause people to lose sight of the fact that they were originally rooted in a conspiracy theory.

"The worry is that these very, very fringe, very violent, very anti-semitic ideas are really being sanded down and mainstreamed to the point where you can show up at a school board meeting screaming about child trafficking and forced vaccination," Rothschild said.