Qatar Signs Anti-Terror Funding Agreement With US Amid Blockade 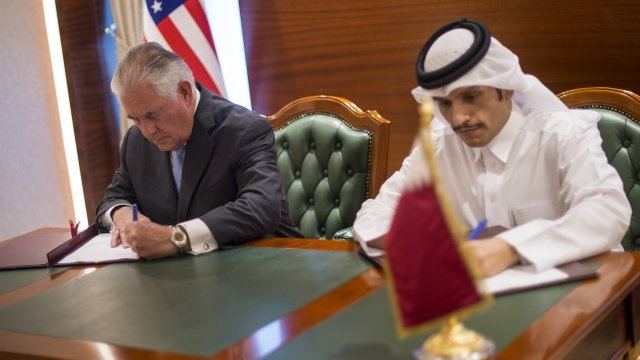 The agreement is seen as a step toward ending the sanctions against the country.

Qatar has signed an agreement with the U.S. to fight "terrorism financing." And it couldn't come at a better time for the country.

Secretary of State Rex Tillerson met with his Qatari counterpart to announce the memo of understanding between the two nations.

Yemen's Cholera Outbreak Is Only Getting Worse

UNICEF and the World Health Organization say Yemen is currently facing the world's worst cholera outbreak, with over 200,000 suspected cases.

Tillerson said: "The United States has one goal: to drive terrorism off the face of the Earth."

Tillerson is in the region this week to try and solve a simmering dispute that's left Qatar almost completely isolated.

In early June, seven countries cut ties with Qatar, saying the country was supporting terrorist groups. Qatar denies that. Four of those countries — Saudi Arabia, Egypt, Bahrain and United Arab Emirates — sent Qatar a list of demands it must meet to end the de facto blockade. Those demands include severing ties to terrorist organizations and ending any funding for those considered terrorists by surrounding countries.

Qatar's foreign minister said the agreement was "not related" to the ongoing dispute.